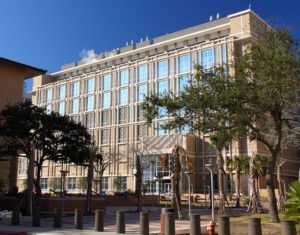 Recently I had the good fortune to visit Galveston National Laboratory (GNL, pictured), a high containment laboratory located on the campus of the University of Texas Medical Branch. Rich Condit and I were the guests of Dennis Bente, who had been asking us to visit since 2011 (see his original email below). I have previously visited four other high containment laboratories (NEIDL; Rocky Mountain Laboratories; Doherty Institute; and Australian Animal Health Laboratory; (read about these experiences here and watch our NEIDL documentary here) and following are my recollections from our visit to GNL.

After the anthrax dissemination events in the US, the government decided that it needed more laboratories that could carry out research on dangerous pathogens. Following a call for proposals, two sites were selected: Galveston and Boston. GNL was constructed at a cost of $174 million (paid by the US) and opened in 2008. Two weeks later, hurricane Ike hit Galveston. However, the GNL was not damaged as it was designed to withstand a category 5 hurricane. The bottom floor was flooded but electrical generators, located 30 feet above the ground, remained functional. NEIDL was the second site, which we previously visited.

One might ask why Galveston, a coastal city susceptible to flooding and hurricanes, would be selected for a high containment laboratory. I asked this question of Tom Ksiazek, Director of High Containment Operations at GNL (we recorded a TWiV with Tom and James Le Duc, Director of GNL, to be released later this year). One factor was that a BSL4 laboratory had already been built in Galveston in 2005 and had functioned without incidents. Having expertise on campus in running a high containment laboratory was clearly an advantage.

Dr. Ksiazek gave Rich and I a tour of the GNL. From the exterior GNL looks like any other campus building; however close inspection reveals otherwise. GNL is not surrounded by a fence as is the NEIDL in Boston. The fence is designed to prevent a truck from driving into the building. Instead of a fence, GNL is unobtrusively surrounded by barriers to prevent such intrusion. However, bollards (see photo) are strategically placed to block pedestrian entrances. The overall effect is that GNL looks like another campus building, while NEIDL is clearly set apart as something different. One other difference I noted at GNL: security officers are located in the lobby of the building, not in a separate guard house as at NEIDL. However there were many similarities between NEIDL and GNL, which is not surprising as they were built at the same time.

Our tour brought us through the different levels of containment at the GNL, from BSL-2 through BSL-4 (there are multiple different levels of BSL-3 containment). Of course we were not able to enter these laboratories (we were previously able to enter the NEIDL because it was not yet in use) but viewed them from the outside. We were also able to enter the spaces between floors, much as we had done at the NEIDL, and see the equipment, wiring and piping needed support the laboratories. In particular, multiple HEPA filters ensure that air entering and exiting is filtered. Such filters must be certified once a year and there are so many of them that it is a full time job. Nearly every piece of equipment is redundant, down to the generators that produce electricity to the cook tanks that autoclave drain water from the laboratories.

At one point we were next to the BSL-4 laboratory, essentially a cube of concrete within the GNL. We could see through windows and observe workers moving around in their specialized suits. At one point one of the scientists came to the window and wrote on a small portable whiteboard: â€œRich and Vincent, welcome to Galvestonâ€.

The electricity generators, which are used in the event of power loss, are fueled by oil. The fuel is kept in tanks which must be securely bolted to the ground, otherwise they would float in the event of flooding! The building rests on pilings that are driven 120 feet into the earth. The first floor houses non-essential space, such as conference rooms. The laboratories begin on the second floor, which is 30 feet about the 100-year floodplain.

Running GNL costs a great deal of money each month – many millions of dollars. Security alone is very expensive – officers are present 24 hours a day, 7 days a week. Electricity, fuel, HEPA filters, labor and more are some of the other significant costs. The US provides some of the monthly cost, but not all of it. The money to pay for experiments, from plastic pipettes to animals, must be provided by the investigators via federal grants. 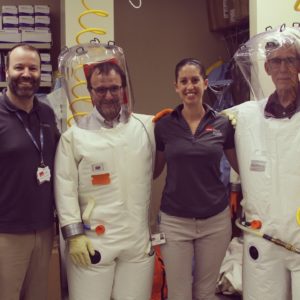 Before our tour of the GNL, we met with Corrie, Senior Biosafety Consultant in the International Biosafety Training Center to learn about the positive pressure suits worn in a BSL-4 lab. We had previously donned the blue ILC Dover suits while visiting the NEIDL. They had blue suits in the Training Center but Rich and I decided to try on the Sperian white suit. We learned that the Sperians are lighter and less noisy than the blue suits. In fact, the noise level inside the blue suit – a consequence of the air being pumped in – is just at what is considered a danger level. Hence, individuals who prefer the blue suits often wear ear plugs.

We were told that your initial site of training often dictates what type of suit you prefer. As the blue Dover suits are thicker, they are well suited to working with animals and animal cages, where the risk of damage to the suit is greater. Rich and I donned the suits and sat at a biological safety cabinet, where we pipetted small volumes of liquids. This manipulation was not easy as we were wearing two layers of gloves. Like any other specialized activity, practice makes perfect: it takes months of training before one is permitted to work in a BSL-4 laboratory.

How do you communicate with others while in these suits? By yelling. The sound of hissing air prevents normal conversation.

A few other suit-related tidbits. These suits cost almost $4000 each and only last about 6 months, due to wear and tear. And because there are not enough suits for everyone, the suits are shared. Which means that if you immediately don a suit after another user, you might encounter odors from their last meal. How do you get your own suit? If you pee in your suit (a la Alan Shepherd in his spacesuit) it will then be yours and only yours. However, because the air pumped into the suits is dehumidified (to avoid condensation on the face plate), you become dehydrated and rarely have to urinate while working. Which is good, as there are no bathrooms in a BSL-4.

My name is Dennis Bente and I am an assistant professor in the Department of Microbiology and Immunology at the University of Texas Medical Branch at Galveston. My lab studies the pathogenesis of tick-borne hemorrhagic fever viruses.Â  I am a big fan of This Week in Virology (following the podcast religiously since episode 5) and your blog. I am relatively new to UMTB, but I have already noticed that your podcast has a large and enthusiastic following here. Therefore, I proposed the idea of inviting you to UTMB to record an episode of TWIV on emerging infectious diseases or hemorrhagic fever viruses in front of a live audience.

UTMB has a unique infectious disease environment with strong programs in arbovirology and hemorrhagic fever research, with great scientists such as Fred Murphy, Robert Tesh, and C.J. Peters just to name a few.Â  UTMB is also home to the firstÂ full-size BSL4 lab located on a university campus in the United States, the only WHO collaborating center in the U.S., and the recently opened Galveston National Laboratory, one of the two National Biocontainment Laboratories funded by NIAID/NIH.

We would be very excited and honored if you decided to visit us, and look forward to hearing from you soon.

P.S.: Galveston is a great place to fish in case Dr. Despommier wants to join you down here.