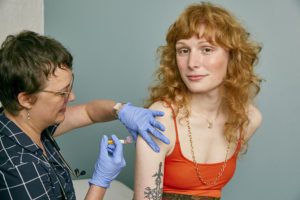 There are two reasons why we need to get a flu shot every year. The first is antigenic drift, an accumulation of minor mutations in the viral genes that code for antibody-binding sites. Although hemagglutinin (HA) is the most immunogenic protein on the surface of the influenza virion, meaning that it elicits the strongest immune response, it is also the most variable portion of the virus. This allows for rapid evolution and selection for newly evolved HAs that evade antibodies generated by vaccination in a previous season. In other words, the virus envelope undergoes changes so that it escapes recognition by our immune system. The second reason we need a new flu shot every year is because serum antibody levels against influenza virus wane after only a few months â€“ our immune response to the virus decreases over time.

Vaccines work by engaging the adaptive (or acquired) immune response, which can be roughly divided into two branches: humoral and cell-mediated immunity.

Humoral immunity, so called because it is mediated by substances in bodily fluids (or â€œhumorsâ€), is primarily associated with antibody production and recognition of antigens by specific antibodies. Antibodies are produced by B cells and are secreted into the humors where they carry out their functions. Cell-mediated immunity is associated with T cells, a subgroup of white blood cells, which can differentiate into a variety of cells with different cytotoxic (killing) functions.

Despite the fact that these two branches of the immune system play distinct roles, there is significant cross-talk between them. For example, T helper cells, which express a glycoprotein called CD4 on their surface, donâ€™t directly destroy infecting agents. Instead, they help coordinate the immune response by activating other immune cells, such as cytotoxic T cells, macrophages, and B cells. As part of this coordinative effort, T follicular helper cells, a special subset of CD4-expressing T cells, engage the humoral immune response by stimulating B cells to start producing antibodies. In the context of influenza virus infection, CD4-expressing T follicular helper cells recognize HA peptides and then activate B cells to produce antibodies against the viral envelope HA.

There is some evidence to suggest that repeated vaccination against influenza virus can reduce vaccine efficacy over time. Based on this hypothesis, the authors of a recent study compared the immune response profiles of annual vaccine recipients to those of subjects who were not vaccinated in the previous year. Their analysis included an assessment of both humoral and cell-mediated immune responses.

The authors then analyzed the effect of previous vaccination on HA-specific antibody responses. While subjects who were vaccinated the previous year showed only a two to four-fold increase in HA-specific serum antibodies, previously unvaccinated subjects showed a six to ten-fold increase in these antibodies. For each of the influenza virus strains analyzed, the authors also show a correlation between diminished CD4 T cell responses and corresponding low antibody responses to the respective HA proteins. This observation is in agreement with the premise that CD4 T cell activation typically precedes antibody production.

The results from this and similar studies are interesting but inconclusive for several reasons. First, the patients â€œself-reportedâ€ their prior vaccination history. The authors donâ€™t comment on whether patients had to provide paperwork to show their vaccination record or whether they used other methods of fact-checking. The sample size was quite small, consisting of a total of 78 participants, and the study was carried out over only two seasons. Consistent with these limitations, the authors are careful to note that the events leading to diminished antibody responses in annual vaccine recipients are likely complex and that more work is needed to clarify a causal relationship linked to repeated vaccination. Although the authors donâ€™t mention this possibility, it is also likely that first-time vaccine recipients exhibit a phenomenon known as â€œoriginal antigenic sinâ€, where the immune system mounts the strongest response to the first version of one particular antigen encountered.

In the meantime, empirical evidence suggests that while both vaccinated and unvaccinated individuals can get sick from influenza virus infection, the most severe cases of illness resulting in hospitalization and/or death typically occur in unvaccinated individuals. Therefore, it is wise to stick to the CDCâ€™s recommendation and get a flu shot every year, preferably by the end of October, to ensure lasting serum antibodies throughout the season.