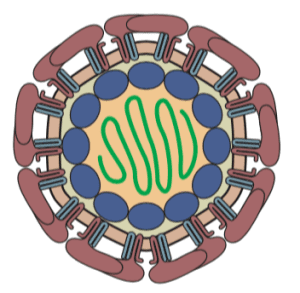 During the 2015-16 Zika virus epidemic in Rio de Janeiro, Brazil, a cohort was established of 244 pregnant women who tested positive for the virus. There were 223 live births in this cohort, and 8 of 216 babies were identified with microcephaly. Between 7-32 months of age, these children had clinical (hearing and eye exam) and neurological evaluations, the latter using the Bayley scales of infant development (which assess cognitive, language, and motor skills).

The mothers of the children studied were infected with Zika virus throughout gestation, from week 3 to week 38. A significant predictor of neurodevelopment deficits was infection at an early gestational age. Risk decreased by 46% with each trimester by which infection was delayed.

Some of the children in this study (24/49, 49%) had abnormal findings early in infancy that resolved in the second or third years of life. Others who were normal at birth (17/68, 25%) developed deficits later.

There are several important conclusions of this study. Absence of microcephaly or other overt structural defects in children born to Zika virus infected mothers does not mean that the children will be clinically (with respect to hearing and eye function) or neurodevelopmentally normal.

All children born to all Zika virus infected women should be closely followed for the first three years of life. The authors suggest that the children have â€˜biannual neurodevelopmental, ophthalmologic and auditory evaluations, even if early evaluations were normalâ€™. As we do not know if there are any difference in the outcomes of children born to asymptomatic or symptomatic women, all Zika virus exposed children should be followed up.

Because congenital infection with Zika virus has only been recently recognized, it is possible that other deficits, such as learning disabilities, might be recognized as children approach school years. Consequently the authors suggest yearly assessments of children until they are 7 years of age.

While microcephaly caused by Zika virus infection in utero focused the worldâ€™s attention on this virus, it appears to be just the tip of the developmental iceberg.