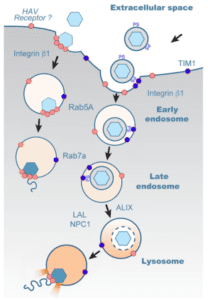 Some viruses have a lipid envelope surrounding their protein capsid, which they get from the host cell membrane during the budding process. The envelope acts as an anchor for viral glycoproteins, which facilitate entry of the newly budded virus into a new cell by recognizing and binding host cell receptors. Such “enveloped” viruses are distinct from “naked” viruses, which lack this envelope because they exit the cell by lysing it.

Until recently, individual members of a viral species were thought to be either enveloped or naked, but not both. However, accumulating evidence suggests that some viruses that were thought to be exclusively naked can exit the cell by hijacking the cellular vesicular transport system. During this process, they acquire a “quasi-envelope” that completely encloses the viral capsid but is devoid of viral glycoproteins.

Viruses may enter a host cell by a variety of mechanisms. During receptor-mediated endocytosis, the virus binds to a receptor on the cell surface, triggering the cellular membrane to fold inward and form a vesicle around the virus. In a well-studied version of this process, the outer layer of the vesicle is coated with a protein called clathrin, which gives the vesicle its rounded shape. Once the vesicle is completely formed, a protein called dynamin cleaves it from the plasma membrane, and the clathrin coat disassembles. Receptor-mediated endocytosis can also occur independently of clathrin, such as when a membrane protein known as caveolin assembles into lipid rafts that trigger the formation of endocytic vesicles.

Regardless of how they form, following their detachment from the plasma membrane, virus-containing vesicles typically fuse to endosomes for further trafficking through the cell. Endosomes are membrane-bound vesicles that transport biomolecules around the cell. As these “early” endosomes mature into “late” endosomes and eventually fuse with lysosomes, they become increasingly more acidic. Lysosomes are very acidic and contain hydrolytic enzymes that break down or recycle cytoplasmic biomolecules. But lysosomes can also process and sort molecules that have been internalized from the extracellular environment. Alternatively, internalized molecules can also be recycled to the cell surface via recycling endosomes. The various endosomal stages are marked by proteins known as “Rabs,” with Rab5A, Rab7A, and Rab11A serving as markers for early, late, and recycling endosomes, respectively. Whether naked and quasi-enveloped HAV particles follow the same or different endosomal trafficking routes following their entry into the cell, is not presently known.

In a series of elegant experiments, Efra Rivera-Serrano and colleagues answered some of the questions about the differences between cellular entry and trafficking mechanisms of naked and quasi-enveloped HAVs.

To determine whether naked and quasi-enveloped HAVs enter the cell by receptor-mediated endocytosis, the authors inhibited the expression of clathrin, dynamin, and caveolin by various means prior to infecting cells with either type of viral particle. Inhibition of clathrin and dynamin prevented the entry of both types of virions, while inhibition of caveolin resulted in slightly reduced entry of quasi-enveloped HAV particles only. This observation suggested that both naked and quasi-naked particles enter cells primarily through clathrin- and dynamin-mediated endocytosis, while the latter may also partially use lipid rafts for entry.

The next question was whether naked and quasi-enveloped HAVs follow the same cellular trafficking routes, or whether their pathways differ after they enter the cell. Analysis by confocal microscopy showed that both types of virions co-localized with endosomes marked with Rab5A and Rab7A around one to two hours post-infection, suggesting that both naked and quasi-enveloped virions traffic through early and late endosomes. However, neither type of virion co-localized with endosomes marked with Rab11A, suggesting that neither naked nor quasi-enveloped particles associate with recycling endosomes. Furthermore, only quasi-enveloped capsids were associated with lysosomes, while naked capsids concluded their cytoplasmic journey in Rab7A-positive late endosomes.

Collectively, the data suggested that naked HAV virions ultimately end up in late endosomes and quasi-enveloped HAV virions ultimately end up in lysosomes, and that the respective capsids release their RNA contents inside these compartments. However, it was still unclear how the viral RNA transitions from the endolysosomal lumen to the cytosol for translation. To address this, the authors infected cells with naked or quasi-enveloped viruses in the presence of a ribotoxin, which inhibits translation. Because this toxin is membrane-impermeable, if its activity is detected in the cytosol, it would indicate that some additional factor punctured the endolysosomal membrane, allowing the toxin to get out of the endosome or lysosome and into the cytosol. Protein synthesis was significantly reduced in cells infected with quasi-enveloped viruses and treated with the toxin, suggesting that these viruses somehow disrupt the lysosomal membrane, allowing the genome to traverse the membrane. In contrast, this effect was not observed in cells infected with naked virions, and it thus still unclear how the viral genomes of naked capsids are released into the cytosol.

Why does HAV generate two different types of virions? Fecal-oral transmission is logistically easier to achieve than blood-mediated transmission. It could be that most initial infections occur from fecal contamination involving naked virions. The virus may then replicate to produce quasi-enveloped offspring, which, hidden from the immune system, spreads more easily within the host to reach its final destination –  the liver.

[For a more in-depth discussion of this paper, you can listen to TWiV 541]