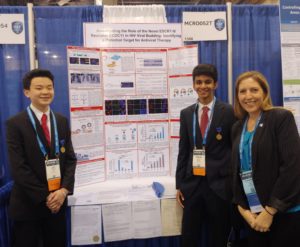 Every year approximately 1800 high school students from more than 80 different countries gather at the Intel International Science and Engineering Fair (ISEF), where they display their independent research and compete for more than $5 million worth of prizes. Last month, I had the honor of serving as a Grand Awards Judge at this prestigious affair in Phoenix, Arizona.

I arrived on a Tuesday morning, attended a brief training session, and then spent the afternoon and evening reviewing the projects that had been assigned to me. Because of a shortage of judges in my category (microbiology), I was asked to review 17 projects, a task that is roughly equivalent to reading 17 different papers on completely unrelated and non-overlapping topics, all in one afternoon. The other judges and I then spent the better part of the following day interviewing the students responsible for each project and assigning each project a score based on a set of criteria. At the end of the day, all the judges convened, and, based on the assigned scores, deliberated for several more hours to recommend projects for best of category; and first, second, third and fourth places in each category. Every judge had the chance to advocate for the projects they thought were deserving of any of these prizes.

Although there were plenty of virology projects, most of the projects assigned to me ranged widely in subject matter and included topics like bioremediation, generation of microbial fuel cells, elimination of biofilms on implants and catheters, impact of ocean acidification on microbes, improvement of farming practices, mechanisms of stress granule formation, and kleptoplasty. Yes, kleptoplasty.

While reviewing the virology projects and interviewing the students, I was particularly impressed with a poster co-authored by Poojan Pandya and Leo Takemaru, two juniors at different high schools in Dix Hills and East Setauket, NY. I recommended this project for best of category for the following reasons:

The project involved investigating the role of the ESCRT-III recruiter CCDC11 in HIV-1 viral budding as a potential target for antiviral therapy. ESCRT-III is a multi-component complex that is responsible for membrane scission and budding. Membrane scission occurs prevalently during cytokinesis, the final step of cell division where the two newly formed daughter cells are physically separated. CCDC11 is a poorly characterized human protein that was only recently shown to be implicated in recruitment and assembly of ESCRT-III components to the site of scission. Recruitment of CHMP2A, one of the key components of the ESCRT-III complex, is impaired in cells knocked down for CCDC11 and thus temporarily incapable of producing CCDC11 protein. Incomplete assembly of ESCRT-III inhibits membrane scission and leads to binucleated cells. ESCRT-III is also implicated in viral infection. For example, the HIV-1 Gag protein, which facilitates the assembly of viral particles, recruits ESCRT-III to cleave the neck that connects a virion to the plasma membrane, allowing the virion to â€œbudâ€ from the plasma membrane.

Because of the known role of ESCRT-III in HIV-1 budding and the recently identified role of CCDC11 in ESCRT-III assembly, Pandya and Takemaru hypothesized that CCDC11 also plays a crucial role in HIV-1 budding. To test this hypothesis, they generated a human CCDC11-knockout cell line using human embryonic kidney cells and CRISPR/Cas9 technology. Unlike gene knockdown cells, which are generated by temporarily blocking translation of the mRNA that encodes the protein of interest, gene knockout cells are generated by mutating the DNA that encodes the protein of interest, resulting in a permanent absence of the protein. Pandya and Takemaru confirmed deletion of the CCDC11 gene in their knockout cells using DNA sequencing technology and confirmed the absence of CCDC11 protein by Western blotting. Using immunomarkers specific for cytokinesis proteins and CCDC11, they also showed that compared to wild type cells, knockout cells lacked CCDC11 at the midbody, a structure critical for the completion of cytokinesis.

Although it is unclear how one could target CCDC11 for HIV-1 therapy without affecting cell division, the idea is interesting and the students did propose several other uses for their cell line, including for the study of ciliogenesis, viral budding, and cytokinesis.

Many of my fellow judges agreed with my opinion regarding the merit of this project, and Pandya Poojan and Leo Takemaru ended up winning the $5,000 Award of Best of the Category of Microbiology.

However, the competition was stiff and the judges deliberated carefully. I was happy that another of my top picks was awarded second place. Luke Long’s project, which he worked on for 5 years, involved a microbial fuel cell built from scratch that was able to illuminate a light bulb using bacteria in plant soil. It amazed me! Luke is a student at Canterbury School in Fort Myers, Florida.

My experience at ISEF was deeply rewarding and inspiring and I look forward to judging at ISEF 2020 in Anaheim, California. Will you join me?

[For more information about judging at ISEF, email judging@societyforscience.org.]