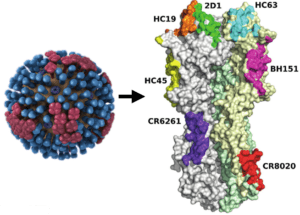 A method for making vaccines that induce antibodies against a specific epitope could be used to produce a universal influenza vaccine that would not have to be changed every year.

Enter protect, modify, deprotect: a method to target the immune response against specific epitopes. The authors call it ‘immunofocusing’. An antibody is first bound to the HA stem to protect the epitope. Next, the exposed parts of the HA are chemically modified to make them non-immunogenic. The protecting antibody is then removed and the HA is injected, leading to the production of antibodies only against the protected stem residues.

The method was tested and appears to work. The protected, modified, and deprotected HA is bound by stem antibodies, but less well by antibodies directed against the head of the molecule. When injected into guinea pigs, the modified HA elicits antibodies that cross-react with HAs from other influenza strains, a property not observed with antisera produced with unmodified HA. An important question that was not answered is whether these antibodies have the ability to neutralize infectivity of a broad range of influenza viruses.

Other viruses might benefit from such an immunofocusing approach. Broadly neutralizing monoclonal antibodies have been isolated that bind the conserved stem of the HIV-1 glycoprotein. The protect, modify, deprotect approach might be used to direct the immune response against such epitopes.

As the authors write, ‘vaccines are among the most profound accomplishments of biomedical science’, yet most in use today were made with decades old technology. Fortunately, vaccinology is being revitalized by the identification of broadly neutralizing antibodies and methods such as immunofocusing.