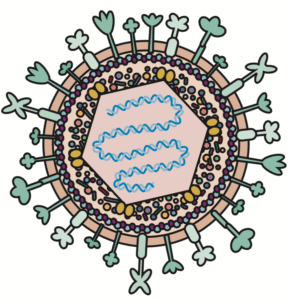 When we are born, our blood contains antibodies that we have inherited from our mothers. They are transferred across the placenta and provide protection from infection until IgG production begins around 15 weeks after birth. Can we exploit such antibody transfer by vaccinating pregnant mothers to protect newborns against infectious diseases that occur early after birth? At least in mice infected with herpes simplex virus, the answer is yes.

Neonatal infections with herpes simplex viruses, which occur by virus transmission from the mother during childbirth or in the early postnatal period, can have serious consequences, including disseminated disease or encephalitis in half of infected newborns. Even when treated with antiviral drugs, such infections can lead to neurological deficits.

These findings suggest that other neonatal infectious diseases, which occur too early in life to be stopped by immunization, might be prevented by immunizing the pregnant mother. Besides herpes simplex virus infections, acquired at birth or shortly thereafter, this approach might also be applicable to prevent respiratory syncytial virus infections, which typically occur in the first few months of life. In addition, maternal immunization against viruses acquired in utero by transplacental passage of virus from mother to fetus – including cytomegalovirus and Zika virus – might also be of benefit to the fetus.

As the authors write, the maternal virome is likely an important determinant of human health. Thanks, Mom.

[For more discussion of this paper, listen to Immune #19]