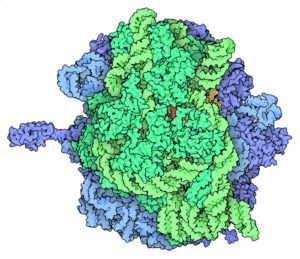 When I first entered the field of virology, in the 1970s, the definition of virus included the then-correct observation that no viral genome encoded any part of the translational apparatus. This dictum was shattered by the discovery of giant viruses which were found to encode tRNAs, aminoacyl tRNA syntheses, and many proteins involved in translation. The phrase â€˜only the ribosome is lackingâ€™ was famously used to describe the giant Tupanvirus. While catchy, it is no longer entirely true: viral genomes have been identified that encode ribosomal proteins.

Ribosomes are the cell machines for protein synthesis (pictured; image credit). In bacteria they are composed of 52 proteins and 3 RNAs; the eukaryotic counterparts have 80 proteins and 4 RNA molecules.

A systematic search of genome sequences from cultivated viruses (e.g. those that have been propagated in cell culture) revealed 5 ribosomal protein genes in 16 viral genomes. These include one virus of eukaryotes (a murine sarcoma virus) and 15 bacteriophages.

These viral ribosomal protein genes, likely captured from cellular hosts, appear to be under strong purifying selection, the removal of deleterious sequences. This observation suggests that they have functions in the viral genomes.

When the genes encoding two of these ribosomal proteins were expressed in the bacteriumÂ E. coli, the protein products were incorporated into ribosomes. Whether they contribute to the regulation of protein synthesis is a question that should be experimentally addressed.

Iâ€™m sure as we identify more and more viral genome sequences we will find additional components not previously discovered. However their discovery will not, as the authors suggest, â€˜further blur the borders between viruses and cellular life formsâ€™. Â The essential feature of viruses is that they are packages of genes that require host cells to provide not only essential proteins for their reproduction, but a structural environment that facilitates this process. When a virus is discovered that has all the genes required for its reproduction, it will likely still require a cellular environment. If that is not needed, then what we are looking at is not a virus but a cell.