We did a lot of science communication in 2018. By we, I mean all the individuals who gave their time selflessly to write for this blog or record podcasts with me. Here is a summary of what we did last year.

I published 44 articles at virology blog last year, about all aspects of viruses and their hosts. It’s short of my goal of one post a week, but still respectable and ‘regular’. Joining me this year was virologist Gertrud U. Rey, who authored 8 posts. David Tuller continued his regular and prolific writing about the disease ME/CFS.

This Week in Virology released 53 episodes, including 14 recorded on the road. In honor of these peripatetic podcasters, we are releasing a 2018 TWiV World Tour special edition t-shirt: 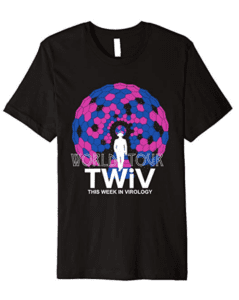 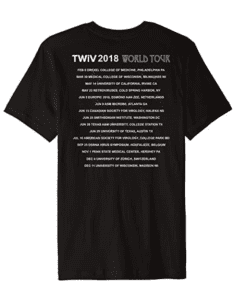 Designed by Sharon Isern, you can purchase the shirts at Amazon.

This Week in Microbiology released 24 episodes last year, including a live show recorded at ASM Microbe 2018. On TWiM I record with Elio Schaechter, Michele Swanson, and Michael Schmidt.

This Week in Parasitism released 40 episodes last year. Joining me on TWiP are Dickson Despommier and Daniel Griffin.

There were 12 episodes of This Week in Evolution in 2018. TWiEVO is Nels Elde and me.

Immune released a dozen episodes in 2018, including a live show at the American Society for Virology annual meeting in College Park, Maryland. The Immune team is Cindy Leifer, Steph Langel, and me.

Just one episode of Urban Agriculture was released in 2018 – an interview by Dickson Despommier with the CEO of Gotham Greens. The future of this podcast is uncertain.

Our YouTube channel is the home of our video releases. In 2018 we produced Â 24 lectures in virology; 47 lectures on parasitic diseases; 11 videos of TWiV live episodes; 1 episode of Virus Watch; and 1 video of a TWiM live episode. 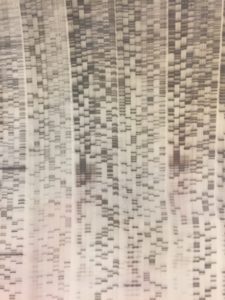 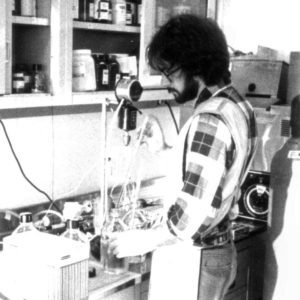 2018 was a great year for our science communication efforts, but 2019 will be even better. Stay tuned! And if you like what we do, please support us financially.