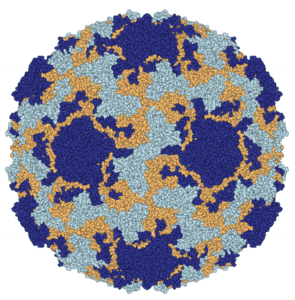 When a human population is exposed to a pathogenic virus, the outcomes among individuals may include asymptomatic, mild, severe, or no infection. Multiple parameters control these responses, including the amount of virus taken up, the age of the host, general health status, nutrition, and more. With the advent of whole exome sequencing we can now assess the role of genotype in disease severity, as illustrated by a study of a child with severe recurrent rhinovirus infections.

The subject of this study is a 5 year old child who, beginning at birth, had experienced a series of viral respiratory infections that often required hospitalization. These included infections with rhinovirus, influenza virus, coronavirus, adenovirus, respiratory syncytial virus, and parainfluenza virus.

The results of whole exome sequencing (determining the sequence of all the protein coding regions of the genome) of the patient and immediate relatives revealed a single homozygous missense mutation in the IFIH1 gene. The protein product of this gene is the MDA5 protein, an innate immune sensor that detects double-stranded RNA in infected cells, leading to the production of interferons (IFN). Both parents and a sibling, who are healthy, were heterozygous for this mutation. Experimental findings in mice and in cultured cells have shown that MDA5 can sense infection with many viruses, including those that have affected the patient.

The amino acid change in MDA5, from lysine to glutamic acid at position 365 (K365E) causes a loss of function of the protein. The altered protein did not bind dsRNA, nor did it lead to signals that activate production of IFN. The IFIH1 mutation was introduced into cells in culture which were then infected with a variety of viruses. Increased yields of HRV, but not influenza virus or respiratory syncytial virus, were observed in these cells.

In summary, this child had been born with a mutation in the gene encoding the innate immune dsRNA sensor, MDA5. This loss of function mutation caused increased susceptibility to the common cold caused by HRV.

The authors conclude that â€œMDA5 has a nonredundant role in innate immunity against respiratory infections caused by HRVâ€. This deficiency is not responsible for the patientâ€™s recurrent infections with other respiratory viruses. This result shows that observations made in mice and even in human cell cultures do not always apply to humans.

As the child aged, the incidence of respiratory virus infections decreased. This decline correlated with maturation of the antibody response. It was previously known that other deficiencies in innate immunity are compensated by antibody responses. Nevertheless, as a consequence of repeated respiratory infections, the patient developed chronic lung disease.

In the future many humans will have their genome sequence determined at birth and made part of their medical records. As a consequence it will be possible to determine what mutations correlate with unusual disease susceptibility. This information might be used to correct such inborn errors. The child in this study would have benefitted from repair of the IFIH1 mutation which would require knowledge of the IFIH1 genotype of both parents prior to conception.