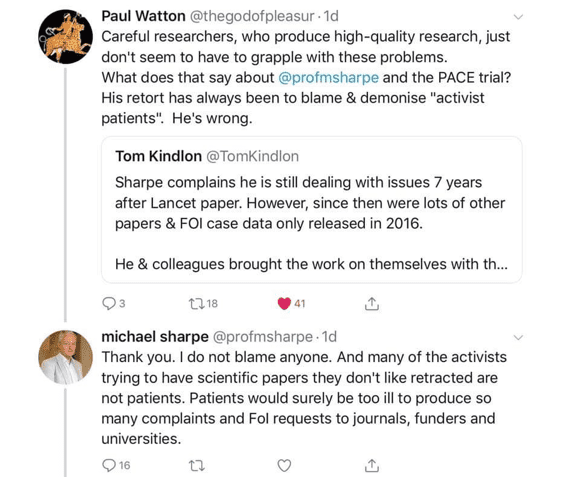 On November 6, members of the Australian ME/ CFS Community sent Professor Sharpe an open letter expressing their concerns about his tweet. He responded the following day, noting that the tweet had not referenced anyone in particular but that he would delete it “given your feeling of offence, which was not intended.” His full response is included after the open letter.

Reference:Â  Your tweet of November 3 that: “…many of the activists trying to have scientific papers they don’t like retracted are not patients. Patients would surely be too ill to produce so many complaints and FOI requests to journals, funders and universities.”

As members of the Australian ME community and their families, many of whom would also identify as activists, we are writing to you in support of a fellow Australian patient, Alem Matthees. This will also be posted as an open letter.

Your tweet makes reference to the work of Alem Matthees, who was successful in his FOI request in the release of data for the PACE trial.

We feel compelled to take issue with your contention that patients could not be producing complaints and FOI requests, as they would be too ill. It is disingenuous and disrespectful to patients and their families, especially to Tom Kindlon and the late Robert Courtney, whose immense contributions despite severe illness we also acknowledge.

Our concern here is for the welfare of Alem Matthees and his family in particular, as well as for the many extremely ill patients who have bravely struggled and risked what is left of their health in order to improve the lot of those living with ME.

We do not seek discussion or explanation. We believe you are aware of the desperate state of health Alem Matthees is enduring. He became completely bedridden in 2016 after submitting the FOI. We simply ask that you acknowledge the deep distress caused by your dismissal of his illness and his heroic efforts in spite of it. We also appeal to your humanity in hoping for an apology.

As Alem Matthee’s mother and full time carer, Helen, has commented on reading your tweet:Â “I would never mention this to Alem. It would break his heart and mine is already broken when I see my son struggle for survival.”

We would be happy to pass on an apology to Alem’s mother.

Yours sincerely,
Members of the Australian ME/CFS Community

107 Members of the Australian ME/CFS Community (six signatures were added after the letter had already been sent to Professor Sharpe):

Thank you for your email.

I had no wish to upset or disrespect anyone with that or indeed any other tweet.

However I think you should please read my tweet carefully. It does not reference any individual. It just makes the point in response to the suggestion that activists are all patients, that many activists, by their own report, are not patients. It also simply states that it would be surprising if very ill people alone, were able to produce the huge volume of complaints and FoI request that deluge the relevant institutions. It did not say that some patients donâ€™t struggle to do this. I have not dismissed anyoneâ€™s illness.

But given your feeling of offence, which was not intended, I am happy to delete the tweet.