Rhinoviruses have a sweet tooth 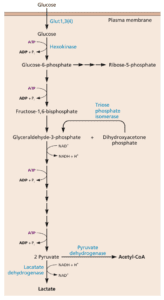 Glucose metabolism. After transport into cells via glucose transporters (Gluts) and phosphorylation by hexokinase, glucose can enter glycolysis or the pentose phosphate pathway for nucleotide synthesis. Glycolysis produces 2 molecules of pyruvate from 1 of glucose, with a net energy yield of 2 ATP and 2 NADH. Image credit.

Glucose is central to these metabolic alterations. This sugar can enter the glycolytic pathway (illustrated), which leads to the production of energy in the form of ATP. Glucose can also enter the pentose phosphate pathway which gives rise to nucleotide biosynthesis. Finally, acetyl-CoA made from glucose can promote the synthesis of fatty acids.

These findings demonstrate that rhinovirus infection induces a glucose-dependent switch towards anabolic metabolism, and inhibition of glycolysis prevents this shift.

Treatment of rhinovirus-infected mice with 2-deoxyglucose caused reduced lung inflammation and lower virus titers in this organ, compared with untreated mice. Animals treated with the glycolysis inhibitor displayed no visible side effects.

The authors conclude that “metabolic starvation” of rhinovirus with 2-deoxyglucose might be a viable antiviral approach. In general, interfering with host cell metabolic alterations induced by viruses might be a plausible target for antiviral therapy.