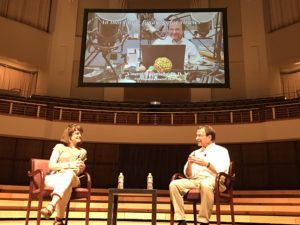 I sat in the green room, 15 minutes before the start of the event, more nervous than I had been for a presentation in recent years. The occasion was the keynote address, which I was about to present before 1500 attendees at the 2018 annual meeting of the American Society for Virology.

I was nervous for two reasons. First, I was trying something completely different for the keynote, and I was not sure if it would be welcomed.

The other reason for my nerves was that my companion for the keynote had not yet arrived.

The keynote address launches the ASV meeting each year. It is typically given by an accomplished scientist who reviews his or her work in the field, and sets the tone for the meeting.

The keynote lecturer is selected by the ASV President which, in my case, was Stacey Schultz-Cherry. When she asked me to present the keynote nearly two years ago, I knew it was not for my science. While we have done some interesting work recently, our best was done years ago. I know that she asked me because of my work in communicating science to the public. Thatâ€™s why I decided to do something different. When I pitched the idea to Stacey, she immediately said â€˜go for itâ€™.

Finally, 10 minutes before start time, my keynote companion arrived – science journalist Michaleen Doucleff of NPR. I had decided that my keynote would not be the usual talk presented at a lectern with PowerPoint slides – but a conversation between two individuals. After years of podcasting Iâ€™ve come to appreciate the value of a conversation compared with a one-sided talk. I chose Michaleen because she writes about science – including viruses – and she had interviewed me on several occasions.

I asked Michaleen to join me – seated in chairs before the audience – and talk about my training, some of my science, the importance of communicating science, and how I have done that in the past years via blogging, podcasting, videos and social media. Several months before the keynote I prepared a set of slides which I wanted to have shown behind us as we chatted.

I chose to have our conversation guided by slides because Iâ€™d seen it successfully done before. Many years ago I went to an event where Jon Bon Jovi sat on a sofa with a DJ and talked about his career, showing slides in the background. Last summer I watched the keynote at the ASM annual meeting presented by astronaut Kate Rubins. She did not give a talk, but sat in a chair opposite science writer Ed Yong. On a screen behind the two played a movie of her in space. 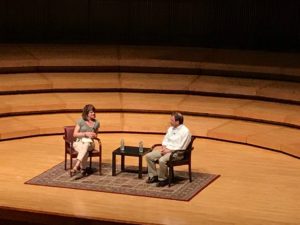 I was greatly relieved when Michaleen showed up, but I was still nervous as Stacy began her introductions. Would the audience like this new format, or would they walk out when they realized they were not going to see a standard data-driven talk?

Michaleen and I walked on stage and sat in two comfortable chairs set before the audience. A large screen hung behind us. I started by describing my path to science, which was certainly non-linear. I showed photos of my parents: my surgeon father, who wanted me to follow in his footsteps, and my English teacher mother, who taught me to write. I did not want to be a doctor and therefore graduated from Cornell, where I was very lost, with a bachelorâ€™s degree in biology but no clear future. To their credit, my parents left me alone. I worked in a microbiology lab for a year, during which time I read Fever by John Fuller. I immediately wanted to become a virologist, but was not sure what to do. The answer lay in advice given by the father of one of my Cornell friends. You can read about it here. The point of this segment was to emphasize that a successful career in science does not have to be planned.

I did my Ph.D. research on influenza virus with Peter Palese – I was his first student – followed by a postdoctoral stint with David Baltimore. I showed my two papers, with David and I as the only authors. Science is bigger and more complex today and most papers have many authors. This situation necessitates learning how to work in large group, a useful skill. But I also think working on a project on your own is also valuable – it teaches you to master your own destiny.

Next I briefly summarized some of the very cool work from my lab over the years, including identifying the cell receptor for poliovirus, producing a transgenic mouse for poliomyelitis, and our recent work on understanding how Zika virus interferes with brain development. I thought I should share at least some of our work as it has formed me as a communicator.

The remainder of the conversation revolved around the need to communicate science, and the different ways we have done this for the past 12 years. It all began with my joining the team writing the first edition of the textbook Principles of Virology. I knew this effort would take away some time from my lab, but I thought it was time to give something back to the field. 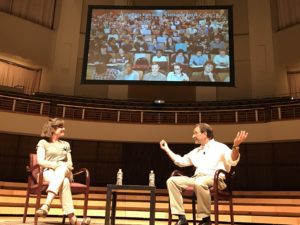 Perhaps the most important point I made was that science is not about you: itâ€™s not about amassing huge amounts of grand funds, building a big lab, and training dozens of people. Itâ€™s about discovery. I told the audience that it was time for them to do something for others, to give back to the field.

I also emphasized the need for scientists to occupy their science – to be the ones communicating it to the public, full of their passion and knowledge of the field. All scientists need to do some kind of communicating, so the public sees us a united voice extolling the benefits of this amazing field.

I did not rehearse the conversation with Michaleen, but as I had sent her the slides she was ready with questions, so that the keynote in the end was truly a conversation. Afterwards many people told me that they very much enjoyed this different format. One young student told me that she expected the keynote to be boring, but was surprised by the conversational presentation. In retrospect, I did not have to be nervous – but I did not know that.

I want to thank Stacey Schultz-Cherry for inviting me to deliver the keynote, and for having the confidence to allow me to have a conversation before the audience. I also thank the many members of the audience at ASV 2018 for coming and listening.

I am sure that next year the keynote will return to the usual format for the foreseeable future. But I did my job if some individuals were inspired to start communicating. And I do hope that in the future, as the keynote address begins, some audience members will remember that one occasion a long, long time ago when it was truly different, and hopefully inspiring. And it was called ‘An inordinate fondness for viruses’.