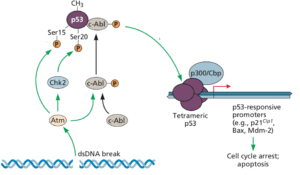 Of all the potential uses for genome editing via CRISPR/Cas9, perhaps the most exciting involves introducing therapeutic changes into human pluripotent stem cells (hPSCs) which can then be differentiated into many different cell types. A serious obstacle to such engineering is the finding that the tumor suppressor p53 inhibits CRISPR/Cas9 editing in hPSCs.

Gene editing is done by introducing short guide RNAs (sgRNAs) into cells together with the Cas9 nuclease. The sgRNAs guide Cas9 to the editing site in the genome, and the enzyme cuts the DNA. The cell then repairs the double-stranded DNA breaks, leading to insertions or deletions (indels). Gene disruption in hPSCs can be efficient; however few cells survive the procedure.

The reason why Cas9 mediated gene editing is lethal in hPSCs is that the double strand DNA breaks are toxic, more so than in other cell types. The reason for such toxicity is the tumor suppressor protein p53, which senses double-stranded DNA breaks and then induces programmed cell death (pictured). This suicide prevents cells from duplicating damaged DNA and passing it on to progeny cells.

Many DNA viral genomes encode proteins that abrogate the function of p53. They do so because viral DNA replication is accompanied by numerous double-strand DNA breaks, which would otherwise lead to cell death and failure of the virus to replicate.

The gene encoding p53 is mutated in over half of human cancers. This protein is a critical component of regulatory circuits that determine the response of cells to DNA damage, to low concentrations of nucleic acid precursors, hypoxia, and other forms of stress.

In retrospect it is not surprising that Cas9 is toxic in stem cells, which have a normal p53 pathway. In contrast, Cas9 shows little toxicity in transformed cells (such as HeLa cells) because the pathways that respond to DNA damage have been altered. That is why the cells are immortal.

Because mutations in the p53 gene can block the protein’s function, it is possible that Cas9 mediated genome engineering could select for cells with such changes. In other words, the clonal expansion of an edited hPSC cell could select for p53 gene mutations that tolerate DNA damage. It would be disastrous to introduce such cells into patients, which could lead to tumor formation.

Knocking out p53 substantially reduces the toxicity of Cas9 in hPSCs. One approach to gene editing, as suggested by the authors, might be to transiently inhibit p53, generate edited cells with Cas9, and restore p53. Such cells must of course be shown to have a functional p53 pathway before they are introduced into humans.

These findings emphasize why caution is always called for when considering therapeutic applications for new technologies.