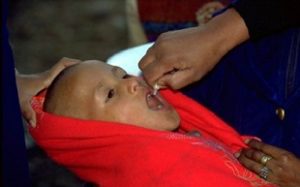 Surveillance for acute flaccid paralysis (AFP) revealed a 6 year old boy in Papua New Guinea with lower limb weakness on 28 April 2018. As we discussed previously, AFP surveillance is a sensitive tool that is used to detect cases of polio, but it is not always caused by the virus.

As is customary in AFP surveillance, stool samples were taken from the child and tested for the presence of poliovirus. Vaccine derived poliovirus type 1 was detected in the stool sample on 21 May. Sequence analysis of the vaccine virus revealed that it had been circulating for some time and had acquired mutations that enable it to cause paralysis. For more information on vaccine derived polioviruses, see our previous discussion of the Venezuelan incident.

A similar type 1 circulating vaccine-derived poliovirus (cVDPV) was also isolated in June from stool samples of two healthy children in the same community. This finding indicates that the virus is circulating in this area, and is a concern because only 61% of children in this region have received all 3 vaccine doses. Many children are therefore susceptible to infection with the type 1 cVDPV.

We can therefore surmise that the 6 year old child had not been immunized with 3 doses of Sabin oral poliovirus vaccine, and was infected by cVDPV. This virus presumably originated from an immunization campaign conducted earlier in the country.

This case of polio is the first in Papua New Guinea since 1996. The country, along with the WHO Western Pacific Region, was certified as polio-free in 2000.

The case of polio in Papua New Guinea emphasizes the difficulties in continuing to use Sabin OPV in the poliovirus eradication campaign. During replication of these viruses in the human intestine they sustain mutations that allow them to cause paralysis. These cVDPVs can circulate in the community and if immunization rates drop, they can cause paralysis, as is the case with the 6 year old boy.

The response to this case of polio, and the finding of cVDPV in the community, is to conduct mass immunization campaigns with OPV. While this procedure is effective at stopping poliovirus circulation, it re-seeds the community with new cVDPVs.

WHO has recommended a gradual shift from OPV to inactivated poliovaccine (IPV) which is non-infectious and cannot cause paralysis (if properly prepared). Until use of OPV is eliminated globally, cVDPVs will still constitute a threat to under immunized communities. How long cVDPVs will continue to circulate after OPV use is discontinued is not known. Because IPV does not provide strong intestinal immunity to poliovirus, it is possible that cVDPVs will circulate for a long time in an IPV only world. Consequently polio immunization must continue well past the time when no cVDPVs are detected.

Our ability to conclude that cVDPVs are no longer present is only as good as our surveillance – which is very good, but not perfect.

Previous post: Trial By Error: My Exchange With Professor Bishop