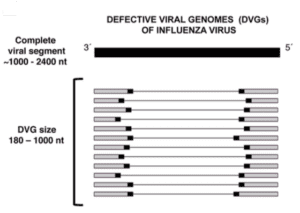 The virulence of a virus – its capacity to cause disease – is determined by both viral and host factors. Even among healthy individuals, infection with a particular virus may have different outcomes ranging from benign to lethal. The study of influenza viruses that cause mild or fatal outcomes reveals that defective viral genomes play a role in determining viral virulence.

Defective viral genomes arise during the replication of many different viruses. They are produced by polymerase errors during copying and are incorporated into virus particles. However, because the genomes contain deletions (pictured – image credit), they are defective and cannot sustain a reproductive cycle. As a consequence, virus stocks containing defective genomes often have low infectivity.

To determine if levels of defective genomes correlate with virulence in humans, a series of isolates was obtained from patients with either mild or severe influenza. In cell culture, isolates from cases of severe influenza produced ten times less defective RNA than isolates from mild cases. However, the mutations in these isolates were different from those previously studied, showing that different amino acid changes can lead to the production of defective RNA.

Central to thinking about the evolution of viral virulence is to understand the selective pressures involved. In the case of more lethal viruses that produce low levels of defective genomes, the consequence is that the virus is able to replicate to higher titers in the host. In turn, higher virus titers in the lung could facilitate more efficient transmission. As transmission to another host is a major selective force, the increase in influenza virus virulence caused by low defective RNA production makes evolutionary sense. However, as not all influenza virus strains evolve towards greater virulence, there must also be fitness costs associated with this property.