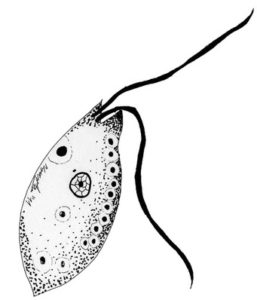 The discovery of Mimivirus in a French cooling tower amazed virologists and changed our view of the biology and evolution of giant viruses. Since then, many other giant viruses have been identified, and with three exceptions, they all appear to infect species of Acanthamoeba. Now a new member of the Mimivirus family has been discovered that infects the flagellated eukaryote Bodo saltans (pictured: image credit).

Bodo saltans virus (BsV) was isolated from freshwater collected from a pond in British Columbia. It infects the eukaryote Bodo saltans, a kinetoplastid, so named because these organisms contain a single large mitochondrion with a genome consisting of many circles of DNA linked together like chain mail. Other kinetoplastids are pathogenic parasites, such as Leishmania and Trypanosoma.

BsV virus particles resemble those of Mimiviruses, and they similarly replicate in cytoplasmic factories. The BsV genome is a 1,385,869 base pair linear double-stranded DNA. It encodes 1227 predicted open reading frames, of which 27% encode proteins that match known eukaryotic sequences, while over half are not recognizable. The genome encodes proteins involved in DNA replication and repair, RNA synthesis and modification, translation proteins, and capsid proteins. Here are some of the unique features of the BsV genome:

It is proposed that BsV is a member of the Mimiviridae subfamily Aquavirinae. While BsV was isolated from fresh water, the finding of abundant related genome sequences in oceanic datasets suggests that they are part of the largest group of giant viruses in the seas.