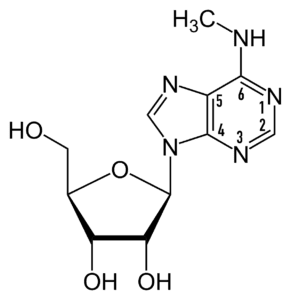 The illustration shows a methyl (CH3-) group added to the nitrogen  that is attached to the #6 carbon of the purine base adenine. The entire molecule, with the ribose, is called N6-methyladenosine (m6A). Methylation of adenosine is carried out by enzymes that bind the RNA in the cell cytoplasm.

The m6A modification is found in multiple RNAs of most eukaryotes. It has also been found in the genome of RNA animal viruses. The modification is added to RNAs by a multi-protein enzyme complex, and is removed by demethylases. Silencing of the methylases decreases HIV-1 replication, while depletion of demethylases has the opposite effect. The replication of other viruses, including hepatitis C virus and Zika virus, is also regulated by m6A modification, but the details differ. For example, m6A negatively affects the replication of the flaviviruses hepatitis C virus and Zika virus.

While it is clear that m6A regulates the replication of RNA viruses, the mechanisms involved are not well understood. Methylation of adenosine is likely to affect multiple functions, including the structure, celllular localization, splicing, stability, and translation of viral RNA (link to review). As m6A is also found in cellular RNAs, studies of its effect on viral processes is likely to provide insight into its role in cellular biology.