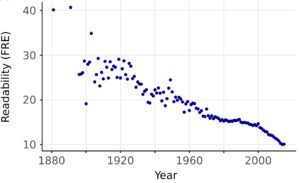 The scientists I know realize that they use jargon, both in their writing and in their seminars – but they can’t seem to stop. There is a very good reason to Â stop using jargon – it has likely lead to a decrease in the readability of scientific texts for the past 100 years (link to article).

To determine if the readability of scientific writing has changed with time, over 700,000 abstracts were downloaded from PubMed, which indexes journal articles in the life sciences. These abstracts were published in 123 prominent journals (Nature, Science, PNAS, for example) in 12 selected fields of research (including microbiology, immunology, neuroscience, and more). The abstracts were subjected to two different measures of readability: the Flesch Reading Ease (FRE) and the New Dale-Chall Readability Formula (NDC).

When the 700,000+ abstracts were analyzed, the FRE and NDC scores showed a clear trend of decreasing readability in the biomedical science literature since 1890 (the graph shows the FRE score; image credit). To put these results in perspective, over 20% of the abstracts have a ‘readability considered beyond college graduate level English’, to quote the authors of the study.

Two sources for the trend of decreased science abstract readability were considered. An increase in the number of co-authors over time, the ‘too many cooks spoil the broth’ effect, was ruled out. But an increase in general scientific jargon correlated with the decreased readability (jargon in the abstracts was measured by using a table of 2,138 scientific jargon words, like ‘novel’, ‘robust’, ‘moreover’, ‘underlying’, and ‘therefore’.)

Why would scientists care about readability of their articles? Because lower readability impedes communicating science not only to the non-specialist, but even to people within the field!

The authors suggest several ways to reverse the trend of decreased readability, including having ‘lay summaries’ accompany articles (done by some journals). Another is to have scientists communicate via social media – I was happy that the authors believe that ‘this trend could be encouraged’.

Another suggestion is to make scientific communication part of undergraduate and graduate education. This suggestion often comes up when I speak to students about communicating science. As someone with a bit of experience in this area, I would be pleased to participate in such efforts.

Finally, I love the suggestion of determining a readability index (r-index) for scientists, analogous to the h-index for journal article citations.