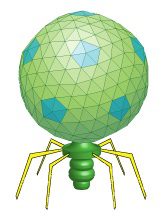 Could ancient host proteins contribute to the replication of a modern virus? The answer is, not very well (link to paper).

Viruses are obligate intracellular parasites, which means that they have to get inside of a host cell to produce more viruses. The genomes of all viruses, even the biggest ones, do not encode anywhere nearÂ the number of proteins that are needed to replicate. The cell provides thousands of proteins that are involved in energy production, membrane synthesis, protein synthesis, transport, and so much more.

Investigators have predicted what ancient versions of a cell protein called thioredoxin might have looked like. They have synthesized such ‘ancient’ thioredoxins and shown that they areÂ stable and active. Thioredoxins are found in nearly all organisms, where they act as antioxidants.

It’s amazing that an ancient protein can work in a modern E. coli. But could ancient thioredoxins support viral growth?

Thioredoxin from E. coli is an essential part of the DNA polymerase complex of the bacteriophage T7 (pictured – image credit). This virus does not form plaques on E. coli lacking the two thioredoxin genes. The only ancient thioredoxin gene that allows phage T7 plaque formation is from the last common ancestor of cyanobacterial, deinococcus, and thermus groups, which is about 2.5 billion years old and has 57% amino acid identity with the E. coli enzyme. But the effienciency of plaque formation was very poor – about 100 million times worse than on regular Â E. coli. None of the older thioredoxins worked.

Why would an ancient thioredoxin work for E. coli but not for bacteriophage T7? Over billions of years, thioredoxin evolves but it must still be able to carry out its function for E. coli. The viruses that infected bacteria 4 billion years ago were very different from contemporary viruses, and so the ancient thioredoxin does not work for modern viruses.Â Today’s thioredoxin could change so that it would not support T7Â replication – as long as the enzyme still works for E. coli.

The authors of this work view it as a proof of principle: that virus growthÂ is not supported by an ancient version of aÂ modern protein required for virus replication. They would like to apply this approach to produce plants that are resistant to viruses, which have serious effects on global agricultural productivity.

I think the work is amazing not only because an ancient protein can be made, but it supports growth of the host andÂ not that of a virus. It might therefore be possible to reconstruct the host-virus arms race, starting from ancient proteins. In this race, the gene encoding an essential cell protein can evolve so that it no longer supports virus replication. Next, the viral genome changes to adapt to the altered cell protein. And so the game goes back and forth.

The authors have shown that they can select mutant bacteriophage T7 isolates that replicate in the present of an ancient thioredoxin. This result suggests that it might be possibleÂ to reconstruct host-virus arms races beginning with an ancestral host protein. If we can make an ancient protein, could we also make an ancient virus? Why not?