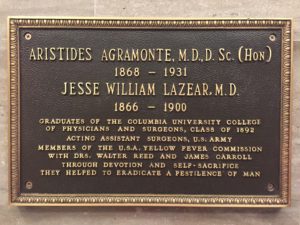 On the wall of a Columbia University Medical Center building just across the street from my laboratory is a plaque commemorating two participants in the discovery of a mosquito vector for yellow fever virus.

Aristides Agramonte, Jesse William Lazear, Graduates of the Columbia University College of Physicians and Surgeons, class of 1892. Acting Assistant Surgeons, U.S. Army. Members of the USA Yellow Fever Commission with Drs. Walter Reed and James Carroll. Through devotion and self-sacrifice they helped to eradicate a pestilence of man.

Yellow fever, knownÂ in tropical countries since the 15th century, was responsible for devastating epidemics associated with highÂ rates of mortality. The disease can be mild, with symptoms that include fever and nausea, but more severe cases are accompanied byÂ major organ failure. The name of the illness is derived from yellowing of the skin (jaundice) caused by destruction of the liver. For most of its history, little was known about how yellow fever was spread, although it was clear that the disease was not transferred directly from person to person.

Cuban physician Carlos Juan Finlay proposed in 1880 that a bloodsucking insect, probablyÂ a mosquito, was involved in yellow feverÂ transmission. The United States Army Yellow FeverÂ Commission was formed in 1899 to study the disease,Â in part because of itsÂ high incidence among soldiers occupying Cuba. Also known as the Reed Commission, it comprisedÂ four infectious disease specialists:Â U.S. Army Colonel Walter Reed (who was the chair); Columbia graduates Lazear and Agramonte, and James Carroll. Lazear confirmed Finlayâ€™s hypothesis in 1900 when he acquired yellow fever after being experimentally Â bitten by mosquitos who had fed on sick patients. Days later, he died of the disease.

The results of the Reed Commissionâ€™s study proved conclusively that mosquitoes are the vectors for this disease. Aggressive mosquito control in Cuba led to a drastic decline in cases by 1902.

Sometimes you don’t have to wander far to find some virology history.

Update 6/16/17: The statement on the plaque that Agramonte and Lazear “helped to eradicate a pestilence of man” is of course incorrect, as yellow fever has never been eradicated. Recent large outbreaks of yellow fever in Brazil and AngolaÂ are examples of the continuing threat the virus poses, despite the availability of a vaccine since 1938.