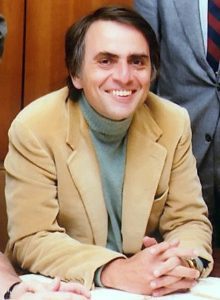 At the ASM Microbe 2017 meeting last week in New Orleans, Ed Yong interviewed astronaut Kate Rubins for the keynote address. The large theatre was packed, and overflow crowds watched the event on monitors throughout the New Orleans Convention Center. But I think that a scientist should have interviewed Dr. Rubins.

Rich Condit and I had the good fortune to interview astronaut Astro Kate for TWiV 444 at ASM Microbe 2017. Several hours later, she was on stage with Ed Yong. Itâ€™s clear why ASM wanted Yong speaking with Rubins: he would draw the biggest possible audience. His science writing is outstanding, and his first book, I Contain Multitudes, sold very well. In fact, EdÂ was at ASM Microbe to autograph copies of his book.

In 2016 the keynote speaker at ASM Microbe was Bill Gates, for the same reason: to draw a crowd. He was interviewed by Dr. Richard Besser, formerly of ABC News.

I have nothing against Ed Yong; I think heâ€™s doing a great job communicating science. But I think that a scientist should have interviewed Kate Rubins. Why? Because the public views scientists as the most trustworthy spokepersonsÂ for science (source: ResearchAmerica). Not bloggers, or journalists, or elected officials, but scientists. And I want scientists to showcase their field, especially in front of other scientists.

What living scientist would have been as popular as Ed Yong at ASM 2017? Surely Steven Hawking, or Neil deGrasse Tyson, who are widely known. But they are not microbiologists. The only life scientist who is as well known as Ed Yong and would draw a big crowd might be Richard Dawkins. Bill Nye is not on this list because heâ€™s an engineer, not a scientist, but he would be a huge draw, bigger than Yong. I would not be surprised to see him at a future ASM Microbe meeting.

We need more celebrity life scientists who are loved by millions, who can explain the nuts and bolts of biology, microbiology, biotechnology, cell biology, and more, and who draw huge crowds. Iâ€™m not one of them – my blog and podcasts have many followers, but I would not draw like Ed Yong did at ASM Microbe (our TWiV with astronaut Kate Rubins attracted 50 people). But I believe that my work in science communication shows young scientists that they can appeal to a broad range of science minded people, and perhaps become very popular themselves.

Let the Yong-Rubins keynote be a call to early career life scientists to communicate their science, build their visibility, and become the next Carl Sagan, who reached millions with his television shows and books. Itâ€™s not easy, especially combined with a career in research and teaching. But Sagan and others have shown that it can be done. And hopefully you will one day be a big draw at a keynote address!