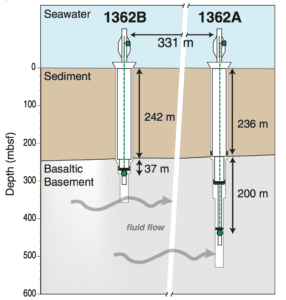 Viruses infect every living organism on the planet, but not every habitat has been explored for their presence. The igneous ocean crust had not yet been examinedÂ for viruses, but seek and ye shall find: there are plenty of viruses under the seas.

The oceanic basement is an enormous ecosystem that lies at the bottom of the seas, beneath a thick layer of sediment. It is composed of igneous rock through which percolates 20 million cubic kilometers of water. Previous study of cores from this region has revelealed the presence of prokaryotes, but no one had looked for viruses.

Facilitating the study of the oceanic basement are seafloor observatories that have been placed into existing boreholes. Two have been placed in 3.5 million year old rock in the northeastern Pacific Ocean. They penetrate hundreds of meters through sediment and into the basement (illustrated; image credit)Â andÂ are fitted with plumbing that allows sampling of uncontaminated fluids from different depths in the basement rock.

Analysis of fluids recovered from these sites revealed both prokaryotes (8,000 per ml) and virus particles (90,000 per ml). Ribosomal RNA sequence analysis showed that bacteria dominated these communities, with some Archaea but virtually no eukaryotes.

Examination of the fluids by electron microscopy showed virus particles of different kinds: tailed and untailed icosahedral particles, untailed globular particles, and rod and spindle shaped. MyÂ favorite is the lemon shaped particle, for its form and implied taste.

To provide information on the viral genomes in the oceanic basement, sequences were determined from total cellular DNA (material retained on a 0.2 micron filter) extracted from the samples. Most viral sequences likely had archaeal hosts. Some prophage sequences were identified – viral genomes integrated into host DNA – which allowed more certain identification of the infected cell.

Most of the identified archaeal and bacterial virusÂ sequences came from the families Myoviridae and Siphoviridae (think tailed, icosahedral viruses). One complete circular DNA genome identified is 55,906 nucleotides in length with 81 open reading frames. Twenty of these encode proteins with recognizable functions, such as capsid proteins, a primase and a DNA polymerase. No genes encoding tRNAs, such as those found in giant viruses, were identified.

Some sequences were similar to those of giant viruses like mimiviruses and phycodnaviruses. These viruses are known to only infect eukaryotes. Eukaryotic genomes were rare in the basement metagenome collections (1% of the community in one location).

I am not surprised that viruses have been found in ocean’s basement.Â Still, I’m amazed when I think aboutÂ how far down they are, in warm water (65 degrees C) in 3.5 million year old rock.

To paraphrase Samuel E. Wright (Under The Sea):

The viruses areÂ always greener
In somebody else’s lake
You dream about going up there
But that is a big mistake
Just look at the virusesÂ around you
Right here underÂ the ocean floor
Such wonderful virusesÂ surround you
What more is you lookin’ for?