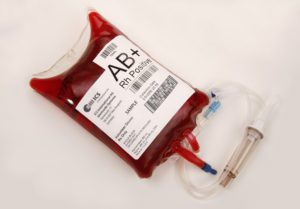 If you have ever received a blood transfusion, along with the red blood cells, leukocytes, plasma and other components, you also were infused with a collection of viruses. A recent study of the blood virome of overÂ 8,000 healthy individuals revealed 19 different DNA viruses in 42% of the subjects.

Viral DNAÂ sequences were identified among theÂ genome sequences of 8,240 individuals thatÂ were determined from blood. Of theÂ 1 petabyte (1 million gigabytes) of sequence data that were generated,Â about 5% did not correspond to human DNA. Within this fraction, sequences of 94 different viruses were identified. Nineteen of these were human viruses. The method is not expected to reveal RNA viruses except retroviruses which are integrated as DNA copies in the host chromosomes.

The most common humanÂ viruses identified were herpesviruses, including cytomegalovirus, Epstein-Barr virus, herpes simplex virus, and human herpesvirus 7 and 8, found in 14-20% of individuals.Â Anelloviruses, small viruses with a circular genome, were found in 9% of the samples. Other viruses found in less than 1% of the samples included papillomaviruses, parvoviruses, polyomavirus, adenovirus, human immunodeficiency virus and human T-lymphotropic virus (the latter two integrated into the host DNA).

The other 75 viruses are likely contaminants from laboratory reagents or from the environment. These include sequences from non-human retroviruses,Â four differentÂ giant DNA viruses,Â andÂ a virus of bees, all found in less than 10 samples. These findings illustrate the challenge in distinguishing bona fide human viruses from contaminants.

Identifying viruses in blood is an important objective for ensuring the safety of the blood supply. Donor blood is currently screened forÂ HIV-1 and 2, human T-lymphotropic virus-1 and 2, hepatitis C virus, hepatitis B virus, West Nile virus, and Zika virus. These viruses are pathogenic for humans and can be transmitted via the blood. Some viruses, such as anelloviruses and pegiviruses, are in most donated blood, yet their pathogenic potential is unknown.Â It is not feasible to reject donor blood that contains any type of viral nucleic acid – if we did, we would not have a blood supply.

Continuing studies of the blood virome are needed to define which viruses should be tested for in donated blood. The human papillomavirus (17 people), Merkel cell polyomavirus (49 people), HHV8 (3 people) and adenovirus (9 people) detected in this study could be transmitted in the blood and their presence should be monitored in future studies.