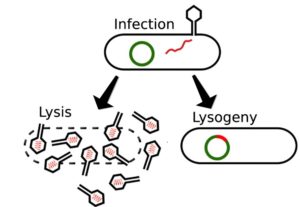 You might recall learning inÂ high school biology thatÂ bacteriophage infection of a host can lead to either replication and cell lysis, or integration of the viral genome into the host (illustrated). The latter event, called lysogeny, spares the host from virus induced killing. For some phages, the decision between lysis and lysogeny appears to be communicated between cells by a small peptide (link to paper).

Evidence that virus-infected cells produce a substance that can regulateÂ the lysis-lysogeny decision came fromÂ the observation that conditioned mediumÂ from Bacillus subtilis infected with the bacteriophage phi3T – prepared so that is was virus and cell free – protects cellsÂ from lysis. The protective component isÂ destroyed by digestion with a proteinase and hence is a protein. Conditioned medium not onlyÂ inhibitsÂ cell lysis, but increases lysogeny, measured by integration of viral DNA into the bacterial genome.

Examination of the genome sequence of phage phi3T suggested that a six amino acid peptide, Ser-Ala-Ile-Arg-Gly-Ala, was the component in conditioned medium that regulates the lytic-lysogenic decision. Addition of the synthetic peptide to infected cellsÂ decreased lysis. The levels of this peptide increase during each cycle of phage infection of the Bacillus host.

The authors call the communication peptide ‘arbitrium’ from the Latin word meaning ‘decision’. The gene encoding the peptide isÂ aimP.

AimPÂ appears to work by entering the bacterium through a transporter protein and binding a protein in the bacterial cell called AimR.Â The AimR protein in turn binds a sequence in the bacterial genome called aimX. When AimR is bound by the peptide, it cannot bind aimXÂ and lysogeny occurs. In the absence of peptide, AimR binds aimX and lysis proceeds. The product of the aimX gene appears to be a regulatory RNA, butÂ how it promotesÂ lysis is not known.

Different phages of B. subtilis also encode peptides that regulate the lysis-lysogeny decision in a phage-specific manner.

These findings describe a viral communication system that determines whether a bacterial host is lysed or lysogenized. When viruses initially infect a host, the result is lysis because levels ofÂ peptide are low. After several cycles of infection the AimP concentrations increase, and upon entry of the peptide into bacteria they lead to lysogeny.

The authors of this work suggest that the arbitrium system is a way for the virusÂ to sense the amount of previous infections to decide whether lysis or lysogeny should occur. If many previous infections have taken place, the host population could be too low to support lytic replication, hence lysogeny occurs. Â Because lysogens can divide, the bacterial population can be restored to a level that can sustain virus infection.

Of course, the virus particle cannot sense anything – it is aÂ bacterial protein that Â binds AimP and another bacterial gene that controls lysis. In other words, the virus-infected cell, not the virus, can sense the amount of previous infections.