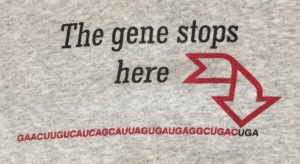 A new breed of vaccines is on the horizon: they replicate in one type of cell, allowing for their production, but willÂ not replicate in humans. Two different examples have recently been described for influenza and chikungunya viruses.

The influenza virus vaccine is produced by introducing multiple amber (UAG) translation stop codons in multiple viral genes. Cloned DNA copies of the mutated viral RNAs are not infectious in normal cells. However, when introduced into specially engineered â€˜suppressorâ€™ cells that can insert an amino acid at each amber stop codon, infectious viruses can be produced. These viruses will only replicate in the suppressor cells, not in normal cells, because the stop codons lead to the production of short proteins which do not function properly.

When inoculated into mice, the stop-codon containing influenza viruses infect cells, and although they do not replicate, a strong and protective immune response is induced. Because the viral genomes contain multiple mutations, the viruses are far less likely than traditional infectious, attenuated vaccines to sustain mutations that allow them to replicate in normal cells. Itâ€™s a clever approach to designing an infectious, but replication-incompetent vaccine (for more discussion, listen to TWiV #420).

Another approach is exemplified by an experimental vaccine against chikungunya virus. The authors utilize Eilat virus, a virus that only replicates in insects. The genes encoding the structural proteins of Eilat virus were replaced with those of chikungunya virus. The recombinant virus replicates in insect cells, but not in mammalian cells. The virus enters the latter cells, and some viral proteins are produced, but genome replication does not take place.

When the Eilat-Chikungunya recombinant virus in inoculated into mice, there is no genome replication, but a strong and protective immune response is induced. The block to replication – viral RNA synthesis does not occur – is not overcome by multiple passages in mice. Like the stop-codon containing influenza viruses, the Eilat recombinant virus is a replication-incompetent vaccine.

These are two different approaches to making viruses that replicate in specific cells in culture – the suppressor cells for influenza virus, and insect cells for Eilat virus. When inoculated into non-suppressor cells (influenza virus) or non-insect cells (Eilat virus), a strong immune response is initiated. Neither virus should replicate in humans, but clinical trials have to be done to determine if they are immunogenic and protective.

The advantage of these vaccine candidates compared with inactivated vaccines is that they enter cells and produce some viral proteins, likely resulting in a stronger immune response. Compared with infectious, attenuated vaccines, they are far less likely to revert to virulence, and are easier to isolate.

These two potential vaccine technologies have been demonstrated with influenza and chikungunya viruses, but they can be used for other virus. The stop-codon approach is more universally applicable, because the mutations can be introduced into the genome of any virus. The Eilat virus approach can only be used with viruses whose structural proteins are compatible with the vector – probably only togaviruses and flaviviruses. A similar approach might be used with insect-specific viruses in other virus families.

Why do I call these vaccines â€˜paradoxicalâ€™? Because they are infectious and non-infectious, depending on the host cell that is used.

Note: The illustration is from a t-shirt, and the single letter code of the protein spells out a message. However the title, ‘the gene stops here’, is wrong. It should be ‘the protein stops here. The 3’-untranslated region, which continues beyond the stop codon, is considered part of the gene.