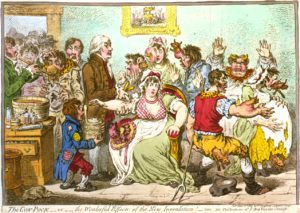 In a recent editorial, the New York Times wrote about â€˜the breakdown of a shared public reality built upon widely accepted factsâ€™. As a scientist, I am appalled by theÂ disdain for factsÂ shown by many in this country, includingÂ the President-Elect. Unfortunately, science is not without its share of fake information.

The Times argues that at one time, nearly everyone had a unified source of news – the proverbialÂ Walter Cronkite. Social media and the internet changed all that, allowing people to have their own sources of news, whether they be real or fake. The web developers in Macedonia whoÂ are paid $30,000 a month to spew out fake news are just part of the problem.

The goal of science isÂ to discover how ourÂ world works. Itâ€™s about finding facts, not fake answers. Yet fake science has always been with us. Not long after Edward Jenner demonstrated vaccination against smallpox using pustules from milkmaids with cowpox, skeptics thought that this process would lead to the growth of cow-parts from the inoculated areas (see illustration). To this day anti-vaxers spew fake science which they claim shows that vaccines are not safe, do not work, or cause autism.

Fake science does not stop with anti-vaxers. There are people who deny climate change (including our President-Elect), despite easily accessible data showing that the trend is real. There are people who, bafflingly, claim that HIV does not cause AIDS, or that Zika virus does not cause birth defects, or that genetically modified plants will cause untold harm to people who consume them. The list of fake science goes on and on. The situation is appalling to any scientist who examines the data and finds clear proofÂ that HIV does cause AIDS, andÂ that Zika virus does cause birth defects.

There is also fake science perpetrated by scientists – those who publish fake data to advance their career. There are soÂ many examples of such science fraud that there is a website to document the inevitable retractions – called RetractionWatch, of course. I find the existence of such a site lamentable.

That fake news can play such a large part in the operation of our society was something I only recognized recently. My initial reaction, as a scientist, was outrage that anyone would want to believe in, and adopt, lies. But this is a naive reaction, not only because bad behavior should always be expected of some humans, but because fake scienceÂ has surrounded me for my entire career.

Nevertheless, I am a scientist who looks for the truth, and I simply cannot tolerate fabrication, whether in science or politics or in any field.

I donâ€™t know how to solve the fake news and fake science problems. But the Times has a suggestion:

Without a Walter Cronkite to guide them, how can Americans find the path back to a culture of commonly accepted facts, the building blocks of democracy? A president and other politicians who care about the truth could certainly help them along. In the absence of leaders like that, media organizations that report fact without regard for partisanship, and citizens who think for themselves, will need to light the way.

Iâ€™m not sure that todayâ€™s profit-drivenÂ media organizations are the answer to the fake news problem. But Iâ€™ve always felt that scientists can help counter fake science. We all need to communicate in some way so that the public sees us as a single voice, advocating the huge role thatÂ science plays inÂ our lives. Thatâ€™s why here at virology blog, and over at MicrobeTV, youâ€™ll always find real science.