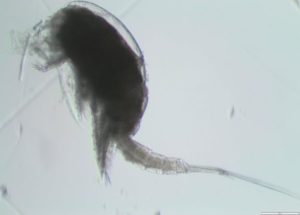 Endosymbionts, organisms that may live inside of another cell, can be infected with viruses. An example is Wolbachia, which lives inside the cells of insects and nematodes, and is infected with Wolbachia phage WO. Itâ€™s always been a puzzle how viruses of endosymbionts pass through the host cell to infect their host. A study of the giant chloroviruses, which infect endosymbiotic algae, provides some answers (link to article).

Chloroviruses are well known because they are big: at one time they had the largest known dsDNA genome, up to 370,000 bases in length (they have since been eclipsed by viruses with far larger genomes). These viruses infect green algae (called zoochlorellae) which are endosymbionts of a variety of fresh water hosts, including paramecium, hydra, and coral.

Chloroviruses are certainly found in the same environments as zoochlorellae – which begs the question, how do they infect their hosts in nature when they are shielded by paramecium? The answer is foraging.

Copepods, which are crustaceans found in nearly every freshwater habitat, include Eucyclops agilis (pictured; image credit) which eats paramecia. These protozoansÂ pass through the Eucyclops digestive tract partially disrupted, exposing the zoochlorellae to the external environment. The zoochlorellae can then be infected with chloroviruses in the water.

Here we have a solution to an age old question in virology which involves copepods not fully digesting their food. A line from the movie Matilda comes to mind: Chew your food!

Modeling predator-prey cycles can also explain the observation that the abundance of chloroviruses in lakes fluctuate throughout the year, peaking in late spring and late fall. Rising levels of prey (paramecium) are followed by rising numbers of predators (Eucyclops), exposing zoochlorellae and leading to a burst of virus production.

The traditional view of virus-host interactions involves random collisions between virus and cells that lead to infection. The observation that predation can expose cells to virus infection places a new variable into this process. Whether foraging can explain how viruses of other endosymbionts access their cell hosts remains to be seen. I can imagine, for example, thatÂ bacteriophage WO might reach its host cell after an insect containig the endosymbiont is eaten by a predator, releasing free Wolbachia.