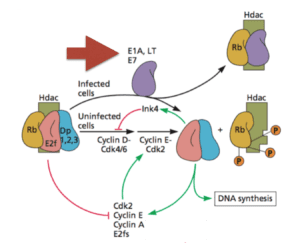 Oncogenes of DNA tumor viruses encode proteins that cause cells to divide incessantly, eventually leading to formation of a tumor. These oncoproteins haveÂ now been found to antagonize the innate immune response of the cell (link to paper).

Most cells encountered by viruses are not dividing, and hence do not efficiently support viral DNA synthesis. The genomes of adenoviruses, polyomaviruses, and papillomaviruses encode proteins that cause cells to divide. This effect allows for efficient viral replication, because a dividing cell is producing the machinery for DNA synthesis. Under certain conditions, infections by these viruses do not kill cells, yet they continue to divide due to the presence of viral oncoproteins. Such incessant division gives the cells new properties – they are called transformed cells – and they may eventually become a tumor.

These so-called viral oncoproteins includeÂ large T antigen (of SV40, a polyomavirus); E6 and E7 (papillomavirus), and E1A (adenovirus). These viral proteins kick cells into mitosis byÂ inactivating cell proteins (such as Rb, pictured) that are normally involved in regulating cell growth. The cells divide, and in the process produce proteins involved in DNA replication, which are then used for viral replication. These oncoproteins accidentally cause tumors: the replication of none of these viruses is dependent on transformation or tumor formation.

Cells transformed with T, E6/E7, or E1A proteins are commonly used in laboratories because they are immortal. An example is the famous HeLa cell line, transformed by human papillomavirus type 18 (which originally infected Henrietta Lacks and caused the cervical tumor that killed her). Another commonly usedÂ transformed cell lineÂ isÂ 293 (human embryonic kidney cells transformed by adenovirus E1A).Â It’s been known for some time that when DNA is introduced into normal (that is, not transformed) cells, they respond with an innate response: interferons are produced.Â In contrast, when DNA is introduced into the cytoplasm of a transformedÂ cell, there is no interferon response.

Cytoplasmic DNA is detected in cells by an enzyme called cGAS (cyclic guanosine monophosphate-adenosine monophosphate synthase) together with an adaptor protein known as STING (stimulator of interferon genes). When cytoplasmic DNA is detected by this system, the antiviral interferons are produced. The viral oncoproteins were found to directly bind STING, but not cGAS. A fiveÂ amino acid sequence within E1A and E7 proteins was identified that is responsible for overcoming the interferon response to cytoplasmic DNA. When this sequence was altered, interaction of the oncoprotein with cGAS was reduced, and antagonism of interferon production in response to cytoplasmic DNA was blocked.

These findings provide a new function forÂ the oncoproteins from three DNA tumor viruses: antagonism of the interferon response to cytoplasmic DNA. Normally DNA is present in the cell nucleus, and when it is detected in the cytoplasm, this is a signalÂ thatÂ a virus infection is underway. The cytoplasmic DNA is sensed by the cGAS-STING system, leading to interferon production and elimination of infection. A herpesvirus protein has been identified that binds to STING and blocks interferon responses to cytoplasmic DNA. Clearly antagonism of the cGAS-STING DNA sensing system is of benefit to DNA viruses.

An interesting question is what selection pressure drove the evolution of viral oncogenes. One hypothesis, described above, is that they are needed to induce a cellular environment that supports viral DNA synthesis. The other idea, favored by the authors of this new work, is that oncogenes arose as antagonists of innate immune signaling. But I can’t imagine these DNA viruses without oncogenes, because they would not be able to replicate very efficiently. Could both functions have been simultaneously selected for? Why not – the same five amino acid sequence that binds cGAS also binds cellular proteins (such as Rb), disrupting their function and leading to uncontrolled cell growth!