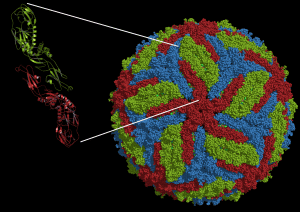 It has been speculated that the development of neurological disease and fetal abnormalities after Zika virus infection may be due to the presence of  antibodies against other flaviruses that enhance disease. In support of this hypothesis, it has been shown that antibodies to dengue virus enhance infection of cells by Zika virus.

There are four serotypes of dengue virus, and infection with one of the serotypes generally leads to a self-resolving disease. When a different serotype is encountered, antibodies to the first serotype bind virus but do not block infection. Dengue virus then enters and replicates in cells that it does not normally infect, such as macrophages. Entry occurs when Fc receptors on the cell surface bind antibody that is attached to virus particles. The result is higher levels of virus replication and more severe disease. This phenomenon is called antibody-dependent enhancement, or ADE.

Because dengue and Zika viruses are antigenically related, an important question is whether antibodies to dengue virus can enhance infection with Zika virus. To answer this question, the authors used two broadly neutralizing anti-dengue virus monoclonal antibodies that had been previously isolated from patients who recovered from infection. These antibodies recognize the viral E glycoprotein; specifially, a loop of the protein involved in fusion of the viral and cell membranes. The amino acid sequence of this fusion loop region is the same in dengue virus and in Zika virus.

The two anti-dengue virus mAbs bind the Zika virus E glycoprotein and also recognize Zika virus infected cells. However, when mixed with Zika virus, they do not neutralize infectivity in a cell line made from rhesus monkey kidneys. But when the antibodies were tested in Fc receptor-bearing cells, Zika virus infection was enhanced by over 100 fold. In the absence of dengue virus antibodies, levels of Zika virus RNA are very low.

These findings have one caveat: enhancement of Zika virus infection by antibodies against dengue virus was measured by PCR amplification of infected cell RNA, not by measuring the yield of infectious virus. The assumption is that increased intracellular viral RNA means more virus released from the cell, but this remains to be confirmed.

It will be important to confirm these findings in animal models of Zika virus infection, and in humans. If true, they have wide implications. If antibodies against dengue virus enhance Zika virus infection in humans, more severe disease might be observed in areas such as Brazil where both viruses co-circulate. It will be necessary to determine if Guillain-Barré syndrome, other neurological complications, and birth defects correlate with antibodies to dengue virus. Perhaps Fc receptors on the placenta and neural tissues allow entry of Zika virus only when bound to dengue virus antibody. It is also possible that antibodies to Zika virus might enhance dengue virus disease.

These observations do not bode well for Dengvaxia, a tetravalent dengue virus vaccine that has been recently licensed in Brazil, Mexico, and the Philippines. Might anti-dengue virus antibodies induced by this vaccine make Zika virus disease more severe? This outcome would be a tragedy, as many years of work has gone into making this vaccine to prevent severe disease caused by dengue virus infections. Second generation dengue virus vaccines such as TV003 are already moving through clinical trials.

It is essential to determine as soon as possible if antibodies induced by Dengvaxia and TV003 enhance Zika virus disease. If so, it will be necessary to assess whether deployment of this vaccine should proceed.

Dengvaxia consists of the yellow fever virus vaccine strain 17D in which the E and prM viral membrane proteins are substituted with those of dengue virus. In contrast, the attenuated TV003 vaccine has only the dengue virus genome. Would a vaccine consisting of TV003 plus an attenuated Zika virus vaccine solve potential problems of antibody dependent enhancement of disease?

Update 4/28/16: Over on Twitter someone asked, “any idea why we DON’T see severe disease in parts of Africa/Asia where dengue and Zika co-circulate”? Good question, too long an answer for Twitter. The easiest is that in humans, there is no antibody depencent enhancement of Zika virus infection by dengue antibodies. But if there is ADE, then there are a number of possible explanations. First, there have not been enough cases in Africa, nowhere near the numbers in the Pacific and South America.

There were certainly some cases of Guillain-Barré syndrome associated with some of the Pacific outbreaks – which I would consider more serious disease and could be potentiated by dengue antibodies.

I also think that Brazil is hyperendemic for dengue virus, with multiple serotypes circulating and people having multiple infections.

But the recent outbreaks are much larger than before, and dengue antibody induced complications of Zika virus infection might only be observed in larger outbreaks.

The authors of the paper discussed in this post suggest that the introduction of Zika virus into a completely naive population could also be a factor, as the age of exposure. Maybe a robust anti-Zika virus antibody response, in a non-naive population, can temper any effects of dengue mediated ADE.