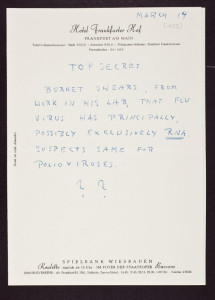 Today it is wellÂ known that viruses may containÂ DNA (poxvirus, mimivirus) or RNA (influenza virus, Zika virus), but for many years it was thought that genomes were only made ofÂ DNA. The surprise at finding only RNA in a virusÂ isÂ plainly evident in a 1953 letter from Harriett Ephrussi-Taylor to James D. Watson (pictured, Cold Spring Harbor Archives Repository*).

While DNA was discovered in the late 1800s, its role as genetic material was not proven until the famous experiments of McLeod, Avery, and McCarty, published in 1944. They showed thatÂ DNA from a strain of Pnemococcus bacteria that formed smooth colonies, when added to a rough colony former, produced smooth colonies.

By this time many viruses had been identified, and it was assumed that their genetic information was DNA. The ‘kitchen blender’ experiments of Hershey and Chase in 1952 proved that the genetic information of bacteriophage T2 is DNA. Watson and Crick proposed the double-helical structureÂ of DNA in 1953, and a few years later published the Central Dogma, which suggested thatÂ information flowed in biological systems from DNA to RNA to protein.

Amidst all these experimental findings, which gave rise to the field of molecular biology, Â comes the note in 1953 fromÂ Ephrussi-Taylor to Watson. Under the heading TOP SECRET she writes:

A structural role for RNA was reinforced as late as 1955 when Heinz Fraenkel-Conrat separately purifiedÂ TMV protein and RNA. When he mixed the two components together, they formed infectious, 300 nm rods. When the RNA was omitted, noninfectious aggregates formed. This finding reinforced the belief that RNA helped form virus particles.

Demonstration of infectivity ofÂ RNA from animal viruses soon followed, forÂ mengovirus, a picornavirus, in 1957 and for poliovirus in 1958 (the latter done at my own institution, the College of Physicians and Surgeons of Columbia University!).

By the early 1950s the idea that RNA could be viral genetic material was clearlyÂ in the minds of virologists, henceÂ Ephrussi-Taylor’s amusing letter on influenza virus and poliovirus.