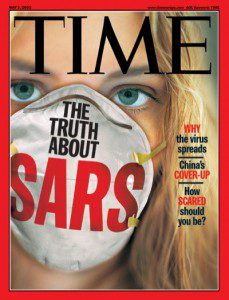 A study on the potential of SARS-virus-like bat coronaviruses to cause human disease has reawakened the debate on the risks and benefits of engineering viruses. Letâ€™s go over the science and then see if any of the criticisms have merit.

The SARS epidemic of 2003 was caused by a novel coronavirus (CoV) that originated in bats. Results of sequence analyses have shown that viruses related to SARS-CoV continue to circulate in bats, but their potential for infecting humans is not known. One can learn only so much from looking at viral sequences – eventually experiments need to be done.

To answer the question â€˜do the SARS-CoV like viruses circulating in bats have the potential to infect humansâ€™, a recombinant virus was created in which the gene encoding the spike glycoprotein of SARS virus was swapped with the gene from a bat virus called SHC014. The SARS-CoV that was used (called SARS-MA15) had been previously passaged from mouse to mouse until it was able to replicate in that host. The use of this mouse-adapted virus allows studies on viralÂ disease andÂ its prevention in a mammalian host.

The recombinant virus, called SHC014-MA15, replicated well in a human epithelial airway cell line and in primary human airway epithelial cell cultures. The recombinant virus replicated just as well as the Urbani strain of human SARS-CoV. This result was surprising because the part of the spike protein of SCH014 that binds the cell receptor, ACE2, is sufficiently different from the SARS-CoV spike,Â suggesting thatÂ the virusÂ might not infect human cells.

First lesson learned: looking at a viral genomeÂ sequence alone does not answer all questions. The spike glycoprotein of a bat coronavirus can mediate virus entry into human cells.

Next the authors wanted to know if SHC014-MA15 could infect mice and cause respiratory disease. Ten week old mice were infected intranasally with either SCH014-MA15 or SARS-MA15. AnimalsÂ infected with SARS-MA15 lost weight rapidly and died within 4 days. Mice infected withÂ SCH014-MA15 lost weight but did not die. When older (12 month) mice were used (these are more susceptible to SARS-MA15 infection), both viruses caused weight loss, but SARS-MA15 killed all the mice while SCH014-MA15 was less virulent (20% of mice died).

Second lesson learned: a human SARS-CoV with a bat glycoprotein can infect mice but is attenuated compared to a human, mouse adapted strain.

The next question asked was whether monoclonal antibodies (think ZMAPP, used in some Ebolavirus infected patients) against SARS-CoV could protect cells from infection with SCH014-MA15. The answer is no.

Third lesson learned: anti-SARS-CoV monoclonal antibodies do not protect from infection with SCH014-MA15.

Could an inactivated SARS-CoV vaccine protect mice from infection with SCH014-MA15? Â An inactivated SARS-CoV vaccine provided no protection against infection SCH-014-MA15.Â When mice were first infected with a high dose of SCH014-MA15, there was some protection against challenge with the same virus, but protection did not last. And the side effects, weight loss and some death, would not be acceptable for a vaccine.

Fourth lesson learned: an inactivated SARS-CoV vaccine does not protect against infection with SCH014-MA15, and the recombinant virus itself is barely protective but not a safe vaccine.

In the final experiment of the paper, the SCH014 virus was recovered from an infectious DNA clone made from the genome sequence. This virus infected primary human airway epithelial cell cultures but not as well as did SARS-CoV Urbani. In mice SCH014 did not cause weight loss and it replicated to lower titers than SARS-CoV Urbani.

Fifth lesson learned: At least one circulating SARS-like bat CoV can infect human cells, but causes only mild disease in mice. Additional changes in the viral genome would likely be needed to cause a SARS-like epidemic.

Letâ€™s now take a look at some of the public statements that have been made about this work.

Richard Ebright says that â€˜The only impact of this work is the creation, in a lab, of a new, non-natural riskâ€. He could not be more wrong.Â For Ebrightâ€™s benefit, I submit myÂ summary above of what we have learned from this work. Furthermore, I suggest that Ebright has not read the paper, or if he had, he has not put it in the context of the gaps in our knowledge of bat coronavirus potential to infect humans. This type of negative quote is easily picked up by the press, but it’s completely inaccurate.

Simon Wain-Hobson says that a novel virus was created that â€˜grows remarkably wellâ€™ in human cells; â€˜if the virus escaped, nobody could predict the trajectoryâ€™.

I do agree that we cannot predict what would happen if SCH014-MA15 were released into the human population. In my opinion theÂ risk of release and spread of this virus in humans is very low. The attenuated virulence of the SCH014-MA15 virus in miceÂ suggests (but does not prove) that the recombinant virus is not optimized for replication in mammals. Recall that the virus used to produce the recombinant, SARS-MA15 is mouse-adapted and may very well have lost some virulence for humans. In a broader sense, virologists have been manipulating viruses for years and none have gone on to cause an epidemic in humans. While there have been recent lapses in high-containment biological facilities, none have resulted in harm, and work has gone on for years in many other facilitiesÂ without harm. I understand that none of these arguments tell us what will happen in the future, but these are the data that we have to calculate risk. Bottom line: the risk of these experiments is very low.

I think the statements by Ebright andÂ Wain-HobsonÂ are simply meant to scare the public and push us towards regulation of what they believe are ‘dangerous’ experiments. They are misleadingÂ because they ignore the substantial advances of the work.Â The experiments in this paper were well thought out, and the conclusions (listed above) are substantial. Creation of the recombinant virus SCH014-MA15 was needed to show that the spike glycoprotein could mediate entry into human cells. Only after that result was obtained did it make sense to recover the SCH014 bat virus. We now understand that at least one circulating bat SARS-like CoV can infect human cells and the mouse respiratory tract. More importantly, infection cannot be prevented with current SARS monoclonal antibodies or vaccines.

This information means that we should embark on a program to understand the different SARS-like spike glyocoproteins on bat CoVs, and try to develop therapeutics to prevent a possible second spillover into humans. This work will require further studies of the type reported in this paper.

My conclusion: these are low risk, high benefit experiments. You may disagree with my assessment of risk, but you cannot deny the benefits of this work. If you do, you simply haven’t read and understood the paper.

As you might imagine, the press has had a field day with this work.Â But many of these articles are misleading. For example, the headline of the Motherboard article touts “Ethical Questions Arise After Scientists Brew Super Powerful ‘SARS 2.0’ Virus”. As I pointed out above, both SCH014-MA15 and SCH104 are less virulent in mice than SARS-CoV, so this headline is completely wrong. An article in Sputnik InternationalÂ has the headline “Uncaging the Animal: Concerns Rise Over Scientists Tests on SARS 2.0” and the sub-headline is “â€˜SARS 2.0â€™ is closer than you might think as scientists are continuing medical tests that could create a whole new virus outbreak.” The article claims that the experiments are ‘science for the sake of science’. If the author had read the Nature article, he or she couldÂ not have reached that conclusion. Both articles feature scary quotations by Ebright and Wain-Hobson. The most egregious may be an article in the Daily Mail, which claims that “New SARS-like virus can jump directly from bats to humans without mutating, sparking fears of a future epidemic”. This statement is also wrong – there are no data in the paper which show that the virus can jump from bats to humans!

Perhaps at fault for much of this hyperbole is the press release on this work issued by the University of North Carolina, the home of the paper’s authors. The headline of the press release is: “New SARS-like virus can jump directly from bats to humans, no treatment available”. Exactly the same as the Daily Mail! Other errors in the press release emphasize that researchers need to work more closely with publicity departments to ensure that the correct message is conveyed to writers.