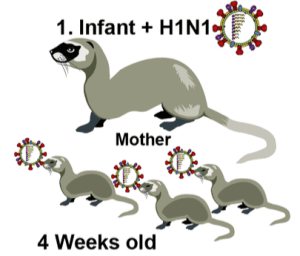 During breastfeeding, mothers provide the infant with nutrients, beneficial bacteria, and immune protection. Fluids from the infant may also enter the mammary gland through retrograde flux of the nipple. Studies in a ferret model reveal that influenza virus replicates in the mammary gland, is shed in breast milk and transmitted to the infant. Virus may also travel in the opposite direction, from infant to mother.

The role of the mammary gland in influenza virus transmission was studied using a ferret model comprising lactating mothers and nursing infants. Intranasal inoculation of nursing mother ferrets with the 2009 H1N1 influenza virus lead to viral replication and development of influenza in both mother and infant. When the study design was reversed, and 4 week old nursing ferrets were inoculated intranasally with the same virus, viral replication and disease ensued first in the infants, and then in the mothers. Infectious virus was recovered both in the mammary glands and in the nipples at day 4 post infant inoculation, and in mother’s milk from 3-5 days post infant inoculation. Histopathological examination of sections of mammary glands from infected mothers revealed destruction of the mammary architecture.

These results show that nursing infants may pass influenza virus to mothers. It seems clear that influenza virus replicates in the mammary gland and that infectious virus is present in milk. How does this virus infect the mother? One possibility is that infection is transmitted by respiratory contact with virus-containing milk, or by inhalation of aerosols produced by nursing. How influenza virus in the mammary gland would reach the mother’s lung via the blood to cause respiratory disease is more difficult to envision and seems unlikely.

When influenza virus was inoculated into the mammary gland of lactating mothers via the lactiferous ducts, both mother and breast feeding infant developed serious influenza. Infectious virus was detected first in the nasal wash of infants, then later in the nasal wash of mothers. Breast milk contained infectious virus starting on day 2 after inoculation. Histopathological examination of sections from infected mammary glands revealed destruction of glandular architecture and cessation of milk production. This observation is consistent with the results of gene expression analysis of RNA from virus infected mammary glands, which revealed reduction in transcripts of genes associated with milk production.

To determine if human breast cells can be infected with influenza virus, three different human epithelial breast cell lines were infected with the 2009 H1N1 virus strain. Virus-induced cell killing was observed and infectious virus was produced.

What would be the implication of a nursing infant infecting the mother’s breast with influenza virus? As I mentioned above, it seems unlikely that this virus would enter the blood, and even if it could, how would the virus infect the apical side of the respiratory epithelium? What does seem clear is that viral replication in the breast could lead to a decrease in milk production which could be detrimental to the infant. If the mother had multiple births, then influenza virus might be transmitted to siblings nursing on the infected mother.

Are you wondering how an infant drinking influenza virus-laded breast milk acquires a respiratory infection? Recently it has been shown that influenza virus replicates in the soft palate of ferrets. The soft palate has mucosal surfaces that face both the oral cavity and the nasopharynx. Ingested virus could first replicate in the soft palate, then spread to the nasopharynx and the lung. A simpler explanation is that nursing produces virus-containing aerosols which are inhaled by the infant.