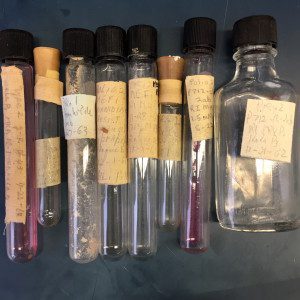 In midsummer 1986, five years after starting my poliovirus laboratory at Columbia University, I received a letter from Frederick L. Schaffer, a virologist at the University of California, Berkeley, asking if I would like to have his collection of poliovirus stocks. He was retiring and the samples needed a home, otherwise they would be destroyed. Of course I jumped at the opportunity to have a bit of virology history.

Three boxes full of dry ice arrived in the laboratory in August 1986. In them wereÂ sixty-six containers of different polioviruses that Dr. Schaffer had collected over the years. All three poliovirus serotypes were represented, both wild type and vaccine strains. The tubes were marked with dates ranging from 1948 to 1965. Most had come into Dr. Schaffer’s hands from well known poliovirologists, including Jonas Salk, Albert Sabin, Igor Tamm, Renato Dulbecco, and Charles Armstrong.

All of the samples were in glass containers, either tubes with a screw cap or a rubber stopper held in place with tape (pictured). A few were in glassÂ bottles of the type that were used to grow cells. The collection held not a single plastic tube: these were the days before plastics entered the virology world. All were identified by hand-written labels on white cloth tape. Some of the labels in the photo read: Polio 1 Brunhilde (1963), Polio 2 MEF1, Polio 2 P712, HeLa P3, 10-21-62. Nearly all the samples were virus-containing cell culture supernatants. 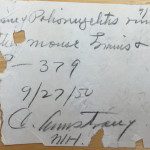 Perhaps the most amazing sample was a specimen labeled ‘Lansing poliomyelitis virus, 9/27/50, passage 379, C. Armstrong, NIH’. Within the glass vial was a intactÂ mouse brain still attached to the spinal cord (there were no cell phones in 1986, hence no photo). The Lansing type 2 strain of poliovirus had been adapted to grow in mice by Charles Armstrong, and this was apparently the 379th intracerebral mouse-to-mouse passage! It was especially exciting for me to receive this sample, because my laboratory had been studying the ability of the Lansing strain of poliovirus to infect mice. I believe that the note accompanying the tube is in Dr. Armstrong’s writing.

I have since transferred most of the samples to plastic tubes which are stored in aÂ -70C freezer. There is a trove of information to be obtained by studying these samples, but there are few poliovirologists left who are interested. Once poliomyelitis is eradicated – perhaps within the next 10 years – these samples, and similar ones throughout the world, will have to be destroyed.