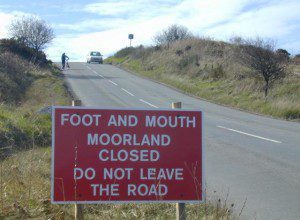 Foot-and-mouth disease virus (FMDV) infects cloven-hoofed animals such as cattle, pigs, sheep, goats, and many wild species. The disease caused by this virus is a substantial problem for farmers because infected animals cannot be sold. Transgenic pigs have now been produced which express a short interfering RNA (siRNA) and consequently have reduced susceptibility to infection with FMDV.

Vaccines against the virus can be protective but they are not an optimal solution. One problem is that antigenic variation of the virus may thwart protection. In addition, countries free of FMDV generally do not vaccinate because this practice would make the animals seropositive and prevent their export (it is not possible to differentiate between antibodies produced by natural infection versus immunization). Furthermore, if there were an outbreak of foot-and-mouth disease in such countries, the rapid replication and spread of the virus would make vaccination ineffective – hence culling of animals as described above is required. Clearly other means of protecting animals against FMDV are needed.

Expression of the siRNA was confirmed in a variety of transgenic pig tissues, including heart, lung, spleen, liver, kidney, and muscle. In fibroblasts produced from transgenic pigs, virus replication was reduced 30 fold. When transgenic pigs were inoculated intramuscularly with FMDV, none of the animals developed signs of disease such as fever or blisters of the feet and nose. In contrast, control non-transgenic pigs developed high fever and lesions. Viral RNA levels in the blood of transgenic pigs were 100-fold lower than in control animals. At 10 days post-infection no viral RNA was detected in heart, lung, spleen, liver, kidney, and muscle, while high levels were observed in these organs from non-transgenic controls.