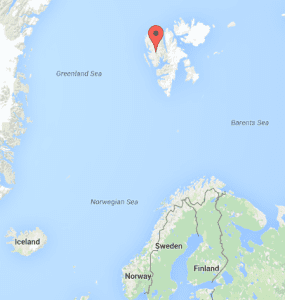 Although we now understand that viruses are the most abundant organisms on Earth, there are gaps in our knowledge about their distribution in different environments. Results of a new study reveal the diversity and distribution of viruses in Arctic fresh waters.

Fresh waters in high latitudes such as the Arctic and Antarctic have low levels of nutrients (e.g. are oligotrophic) and support the growth mainly of microorganisms. They are good model systems for understanding how viruses affect microbial communities and the entire ecosystem. It is known that diverse viral communities, comprising novel families of single-stranded (ss) DNA viruses, dominate the fresh waters of the Antarctic Lake Limnopolar. However no large scale studies of the Arctic fresh water virome have been done.

Fresh water was collected in three different years from six lakes in Spitsbergen, Norway (red symbol on map). Viral particles were purified from the water samples and their genome sequences were determined. Only about 10% of the viral sequences could be assigned to a previously known virus family. Most (86%) of the recognizable sequences were from ssDNA viruses, and similar viruses were found in all six lakes.

Comparisons with viromes from other freshwater locations revealed similar taxonomic distributions in Antarctic freshwater but not elsewhere. As these locations are at opposite ends of the global poles, the results suggest that some viruses may be dispersed over long distances. The Arctic and Antarctic fresh water viromes do contain different viral species, despite being quite similar environments. On the other hand, the Arctic fresh water virome is very different from the Arctic Ocean virome. The finding of diverse viral communities in Arctic and Antarctic fresh waters indicates that, unlike larger organisms, viral richness might not decrease with distance from the equator.

The authors of this study did not characterize the RNA virome of Arctic fresh water lakes, but they did find sequences of single-stranded RNA viruses in their data sets. Because the authors sequenced DNA only (their protocol did not include a step to convert RNA to DNA before amplification), these RNA viral sequences likely represent DNA-RNA hybrid viruses. These viruses probably were produced by recombination of a DNA virus with DNA produced by reverse transcription of an RNA virus.

When Lake Limnopolar thaws in the spring, its viral community changes from ssDNA viruses to dsDNA viruses, perhaps as the hosts also change. Whether similar changes take place in Spitsbergen should be determined to help illuminate how viruses control high latitude microbial communities.