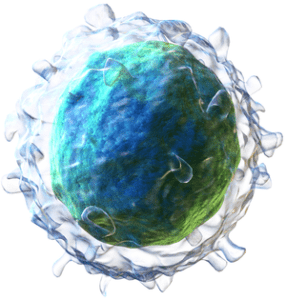 Patients with myalgic encephalomyelitis/chronic fatigue syndrome (ME/CFS) showed clinical improvement after extended treatment with the anti-B-cell monoclonal antibody rituximab. This result suggests that in a subset of patients, ME/CFS might be an autoimmune disease.

Rituximab is a monoclonal antibody against a protein on the surface of B cells known as CD20. When the antibody is given to patients, it leads to destruction of B cells, which are the producers of antibodies, proteins that are made by the immune system to counter infections. The drug has been approved by the US Food and Drug administration to treat diseases of B cells such as lymphomas, leukemias, and autoimmune conditions.

ME/CFS is a disease of unknown etiology and mechanism that includes symptoms of severe fatigue, post-exertional malaise, pain, cognitive and sleep problems that affects 0.1-0.2% of the population. A previous randomized, phase II trial of rituximab treatment showed clinical benefit in 20 of 30 patients. The improvements were evident 2-8 months after treatment, leading the study authors to suggest that remission requires elimination of long-lived antibodies after depletion of B cells.

The current study was done to determine the effects of sustained treatment with rituximab. Included patients (29) were 18-66 years of age and diagnosed with ME/CFS according to Fukuda 1994 criteria. All were given rutiximab infusions two weeks apart, then at 3, 6, 10, and 15 months, and followed up for 36 months. Self-reported symptoms were recorded every second week and used to calculate scores for fatigue (comprising post-exertional malaise, need for rest, daily functioning), pain (muscle, joint, and cutaneous pain and headache) and cognitive scores (concentration ability, memory disturbance, mental tiredness).

Clinically significant responses were found in 18/29 patients (64%), with a lag of 8-66 weeks. After 36 weeks 11 of 18 responding patients were still in clinical remission. Nine patients from the placebo group in the previous study were included in this trial; of these, six had clinical improvement.

These results show that some ME/CFS patients benefit from ablating B cells. The delayed response, coupled with the relapse after cessation of treatment and B cell regeneration, suggests that antibodies are involved in the pathogenesis of the disease. Because onset of ME/CFS in many patients correlates with a viral infection, it is possible that antibodies to viral proteins may cross-react with self proteins, leading to autoimmune reactions that cause disease. Treatment with rituximab would lead to reduced levels of such antibodies, thereby reducing symptoms.

These results warrant trials of larger numbers of ME/CFS patients in other countries (this study was carried out in Norway) to determine if ablation of B cells would have a similar effects elsewhere. It would also be useful to determine the total repertoire of antiviral antibodies produced by ME/CFS patients. Such antibodies can be identified using the newly developed VirScan assay, which requires a small amount of blood and is relatively inexpensive. The results will indicate whether certain viral infections in a large population of ME/CFS patients predispose to the illness. Furthermore, the results may also be used to guide efforts to determine whether such antibodies react with human cellular proteins. A similar approach was used to determine that antibodies to an influenza virus protein cross react with a neuropeptide receptor, leading to narcolepsy.

While these findings are promising, they also show that not all ME/CFS may involve autoimmune pathogenesis. Other creative approaches will be needed to determine the cause of disease in individuals who do not respond to rituximab.