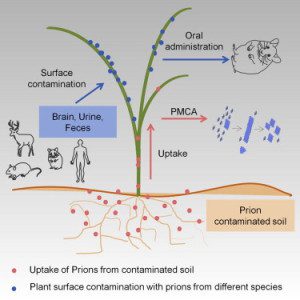 Chronic wasting disease is a prion disease of cervids (deer, elk, moose) that is potentially a threat to human health. A role for environmental prion contamination in transmission is supported by the finding that plants can take up prions from the soil and transmit them to animals.

A concern is that prions of chronic wasting disease could be transmitted to cows grazing in pastures contaminated by cervids. Consumption of infected cows would then pass the disease on to humans. When deer are fed prions they excrete them in the feces before developing clinical signs of infection, and prions can also be detected in deer saliva. In the laboratory, brain homogenates from infected deer can transmit the disease to cows.

To determine whether prions can enter plants, wheat grass roots and leaves were exposed to brain homogenates from hamsters that had died of prion disease. The plant materials were then washed and amounts of prions were determined by protein misfolding cyclic amplification. Prions readily bound these plant tissues, at low concentrations and after as little as 2 minutes of incubation. Mouse, cervid, and human prions also bound to plant roots and leaves. When living wheat grass leaves were sprayed with a 1% hamster brain homogenate, prions could attach to the leaves and be detected for 49 days.

To determine if prions inÂ plants could infect animals, plants were exposed to brain homogenates, washed thoroughly, and then fed to hamsters. The positive control for this experiment was to feed hamsters the brain homogenates. All animals fed infected plants or brain homogenates succumbed to prion disease.

Plants can alsoÂ take up prions from animal waste. This conclusion was reached by incubating leaves and roots for 1 hour with urine or feces obtained from prion-infected hamsters or cervids. Prions were readily detected in these samples, even after extensive washing.

Experiments were also done to examine whetherÂ plants could take up prions from the soil. Barley grass plants were grown on soil that had been mixed with hamster brain homogenate, and thenÂ 1-3 weeks later, stem and leaves were assayed for the presence of prions. Small amounts of prions were detected in stems from all plants, while 1 in 4 plants contained prions in leaves, at levels that should be able to infect an animal.

These results show that prions can bind to plants and be taken into the roots, where they may travel to the stem and leaves. Therefore it is possible that prions excreted by deer couldÂ pass on to other animals, such as grazing cows, or even humans consuming contaminated plants (illustrated – image credit). Cooking plants will not eliminate infectivity, just as cooking contaminated beef did not halt the spread of bovine spongiform encephalopathy. Keeping cervids out ofÂ grazing or growing fields should be consideredÂ as a way to manage the risk of prions entering the human food chain.