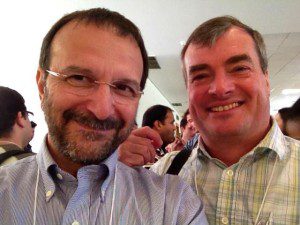 Virologist Richard Elliott passed away on 5 June 2015. I have known Richard since 1979 and I would like to provide some personal recollections of this outstanding virologist.Â A summary of his work can be found at the MRC-University of Glasgow Centre for Virus Research science blog.

I first met Richard in 1979 when he joined Peter Palese’s laboratory at Mt. Sinai School of Medicine in New York City. We overlapped for only about a year but it was enough to get to know him: he was a hard-working, enthusiastic virologists and a good friend. We shared many beers in New York City. At the end of 1979 I went off to David Baltimore’s laboratory where in 1981 I produced an infectious DNA clone of poliovirus. It proved very difficult to make infectious DNAs of negative strand RNA viruses, and it was Richard who was the first to accomplish this feat in 1996Â for a virus with a segmented genome. This work was very important as it showed that infectious DNA clones were not limited to RNA viruses with monopartite genomes.

I remained in contact with Richard over the years but I did not see him in person until the 2010 meeting in Edinburgh of the Society for General Microbiology. The following year he joined me, Connor Bamford, Wendy Barclay, and Ron Fouchier for TWiV #177 recorded in Dublin. Schmallenberg virus had just emerged as a new pathogen of livestock, and he discussed his work on this virus.

I next saw Richard in a 2011 meeting of the Brazilian Society for Virology. When I arrived in Brazil it was quite hot, and I found Richard sitting by the pool, reviewing manuscripts in his bathing suit. I snapped a few photos of him and put them on Facebook. Later that evening he said his laboratory had asked why pornographic photos of him were on the internet – he was shirtless in my pictures (with Grant McFadden in the photo). 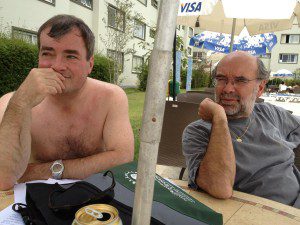 Richard visited New York in the summer of 2014 but we were unable to connect. Early this year Richard had agreed to join TWiV again for an episode from Glasgow. Sadly he became too ill to participate and died on the Friday before I traveled to Scotland. While there I briefly visited the Elliott lab at the University of Glasgow MRC-Centre for Virus Research, nearly a week after his death. I’m happy that I made the lab members smile:

I can still remember Richard telling me how to spell his name: two ls, two ts. Richard was an excellent virologist, mentor, and friend. I will miss him.

Update: Corrected to reflect the fact that Richard produced the first infectious DNA of a segmented (-) strand RNA virus.