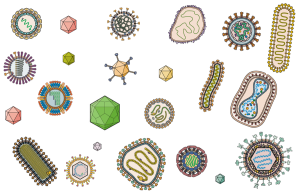 Did you ever wonder what different virus infections you have had in your lifetime? Now you can find out with just a drop of your blood and about $25.

Immune defense systems ofÂ many hosts produce antibodies in response to virus infections. TheseÂ large proteins, which are generally virus specific, can block or inhibit virus infection, and persist at low levels for many years after the initial infection. Hence it is possible to determine whether an individual has had a virus infection by looking for anti-viral antibodies in the blood. Up to now the process of identifying such antibodies has been slow and limited to one or a few viruses. A new assay called VirScan allows unbiased searches for all the virus antibodies in your blood, providing a picture of all your past infections.

To identify the human antivirome, DNAs were synthesized encoding proteins from all viruses known to infect humans – 206 species and over 1000 strains. These DNAs were inserted into the genome of a bacteriophage, so that upon infecting bacteria, the viral peptides are displayed on the phage capsid. These â€˜displayâ€™ phages were then mixed with human serum, and those that were bound by antibodies were isolated. The DNA sequence of the phage genomes were then determined to identify the human virus bound by the antibodies.

This method was used to assay samples from 569 humans. The results show that each person had been exposed to an average of 10 viruses, with a range from a few to over 20 (two individuals had antibodies to 84 different virus species!). The most frequently identified viruses included herpesviruses, rhinoviruses, adenoviruses, influenza viruses, respiratory syncytial virus, and enteroviruses. The overall winner, found in 88% of samples, is Epstein-Barr virus.

These results are not unexpected: all of us are infected with at least a dozen viruses at any time, and the viruses identified in this studyÂ known to infect much of the human population. What was surprising is the absence of some common viruses, such as rotaviruses, and the ubiquitous polyomaviruses. According to serological surveys, the most common human viruses are the small, single-stranded DNA containing anelloviruses. Yet the related torque teno virus was only found in 1.7% of samples. These differences are likely due to a combination of technical and biological issues (e.g., failure of antibodies to certain viruses to persist in serum).

This new assay may one day become a routine diagnostic tool that is used along with complete blood counts and chemistries to know if a patientâ€™s signs and symptoms might be attributable to a past virus infection. VirScanÂ technology is not limited to virus infections – it can be used to provide a history of bouts with bacteria, fungi, and parasites.

VirScan might also allow us to determine which virus infections are beneficial, and which contribute to chronic diseases such as autoimmune or neurodevelopmental disorders or cancer. The assay can be used to conduct unbiased population-based studies of the prevalence of virus infections and their possible association with these diseases. Such connections were not previously possible with antibody assays that search for one virus at a time. This approach was not only inefficient, but required guessing the responsible virus.

Some other findings of this study are noteworthy. As expected, children had fewer virus infections than adults. HIV-positive individuals had antibodies to more viruses than HIV-negative individuals, also expected given the damage done by this virus to the immune system. Frequencies of anti-viral antibodies were higher outside of the United States, possible due to differences in genetics, sanitation, or population density. In most samples, there was a single dominant peptide per virus, although there were occasional differences among populations. This information might be useful for improving vaccines, or tailoring them to specific countries or regions.

Update: It would be very informative to use VirScan to searchÂ for antibodiesÂ against viruses that are not known to infect humans. Other animal viruses, plant viruses, insect viruses: to which do a significant fraction of humans respond? The information might identify other viruses that replicate in humans and which might constitute future threats (or present benefits).