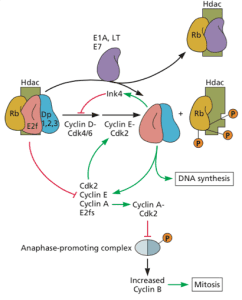 A major goal of viral oncotherapy – the use of viruses to destroy tumors –  is to design viruses that kill tumor cells but not normal cells. Two adenoviruses provide perfect examples of how this specificity can be achieved.

Adenovirus CG0070, designed to treat bladder cancer, and adenovirus Oncorine, for head and neck tumors, replicate only in tumor cells. The selectivity is caused by mutations introduced into the viral genomes.

When adenovirus infects a cell, the first event is synthesis of mRNA that encodes the E1 proteins. These proteins are needed to start cellular DNA synthesis. Most cells in our bodies are not dividing, an environment not conducive to viral replication. The adenovirus E1 proteins solve this problem. The E1A protein binds the cellular Rb (retinoblastoma) protein, which is normally bound to members of the E2f family of transcription factors (illustrated, upper left). Binding of E1A to Rb frees E2f which goes on to induce the transcription of cell genes needed for DNA synthesis and cell division.

The genome of CG0070 (illustrated below) has been modified so that the promoter for mRNA synthesis of the E1 proteins is replaced by the viral E2f promoter. This promoter requires E2f transcription factors for activity; hence the promoter does not function in non-dividing cells in which Rb is bound to E2f. However, many tumors lack Rb, and E2f is always available. CG0070 will replicate in such tumor cells.

The genome of adenovirus Oncorine lacks the early region protein E1b-55K. The function of this viral protein is to bind the cellular protein p53, which would otherwise halt division and induce death of the infected cell. Binding to p53 leads to its degradation, allowing the virus to execute its 24 hour reproductive cycle. Adenovirus lacking the E1b-55K protein will not replicate in normal cells. However, the virus will replicate in p53 deficient tumors.

Oncorine has been licensed in China for the treatment of head and neck tumors, while CG0070 is in phase III clinical studies for the treatment of bladder cancer. Both oncolytic adenoviruses were developed by using knowledge of fundamental aspects of viral replication, yet another illustration of how basic research can lead to clinical applications.