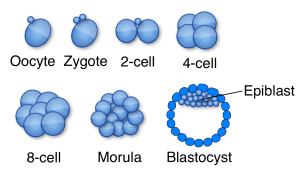 About eight percent of human DNA is viral: it consists of retroviral genomes producedÂ by infections that occurred many years ago. These endogenous retroviruses are passed from parent to child in our DNA. Some of these viral genomes are activated for a brief time during human embryogenesis, suggesting that they may play a role in development.

There are over 500,000 endogenous retroviruses in the human genome, about 20 times more than human genes. They were acquired millions of years ago after retroviralÂ infection. In this process, viral RNA is converted to DNA, which then integrates into cell DNA. If the retroviral infection takes place in the germ line, the integrated DNA may be passed on to offspring.

The most recent human retroviral infections leading to germ line integration took place with a subgroup ofÂ human endogenous retroviruses called HERVK(HML-2). The human genome contains ~90 copies of these viral genomes, which might have infected human ancestors as recently as 200,000 years ago. HERVs do not produce infectious virus: not only is the viral genome silenced – no mRNAs are produced – but they are littered with lethal mutations that haveÂ accumulated over time.

A recent study revealed that HERVK mRNAs are produced during normal human embryogenesis. Viral RNAs were detected beginning at the 8-cell stage, through epiblast cells in preimplantation embryos, until formation of embryonic stem cells (illustrated). At this point the production of HERVK mRNA ceases. Viral capsid protein was detected in blastocysts, and electron microscopy revealed the presence of virus-like particlesÂ similar to those found inÂ reconstructed HERVK particles. These results indicate that retroviral proteins and particles are present during human development, up until implantation.

Retroviral particles in blastocysts are accompanied by induction of synthesis of an antiviral protein, IFITM1, that is known to blockÂ infection with a variety of viruses, including influenza virus. A HERVK protein known as Rec, produced in blastocysts, binds a variety of cell mRNAs and either increases or decreases their association with ribosomes.

Is there a function for HERVK expression during human embryogenesis? The authors speculate that modulation of the ribosome-binding activities of specific cell mRNAs by the viral Rec protein could influence aspects of early development. As Rec sequences are polymorphic in humans, the effects could evenÂ extend to individuals. In addition, HERVK induction of IFITM1 might conceivably protect embryos against infection with other viruses.

The maintenance of open reading frames in HERV genomes, over many years of evolution, suggests a functional role for these elements. Evidence for such function comes from the syncytin proteins, whichÂ  are essential for placental development: the genes encoding these proteins originated from HERV glycoproteins.Â However, not all endogenous retroviruses are beneficial: a number of malignant diseases have been associated with HERV-K expression.