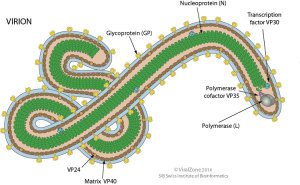 Given the extent of the Ebola virus outbreak in West Africa, transport of an infected individual to the US was bound to happen. The case is an adult who had contact with an Ebola virus-infected woman in Liberia, then traveled to Dallas. He had no symptoms before arriving in the US and therefore did not likely transmit the infection to airplane passengers. He sought medical care on 26 Sep 2014 and was admitted to Texas Health Presbyterian Hospital 28 Sep 2014 where he is currently under isolation. Samples sent to the CDC tested positive for Ebola virus. There are excellent summaries of the events at ProMedMail and the CDC website.

Apparently the Dallas patient told a healthcare worker during his first hospital visit that he had been in Liberia. This information was not transmitted to his physician. The word ‘Liberia’ should have set off alarm bells. Furthermore, if the physician did not receive the patient’s recent travel history, he/she should have requested it. There is no room for error when dealing with Ebola virus infection.

It is puzzling that travel (excluding healthcare workers) out of the affected West African countries is still permitted. As moderator JW notes on ProMedMail: “This chain of events illustrates the danger that anybody arriving from Liberia, even without symptoms on departure from there or on arrival in the USA (or anywhere else in Africa or overseas) may be incubating Ebola — but not international volunteers who have only been in contact with Liberians while wearing adequate PPE (personal protection equipment).”

Why is it important to stop travel out of the affected countries? While I’m confident that the US can detect and properly contain imported Ebola virus infections, not all countries will be able to do so. There are dozens of other countries that are unprepared to deal with an infected case, from diagnosis to isolation to treatment. I can easily imagine infection quickly getting out of control in such countries: millions are at risk. While the economics of stopping air travel out of Liberia, Sierra Leone, and Guinea will be severe, they cannot approach the devastation of having outbreaks burning simultaneously in multiple countries.

Update: NPR has a good explanation of the reproductive index, or the number of persons who can be infected by another infected person during an outbreak. For Ebola virus, this number is 1-2. This low number is why quarantine can be effective.

Previous post: Could the Ebola virus epidemic have been prevented?