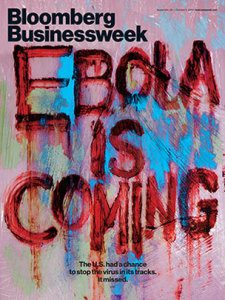 The cover of this weekâ€™s issue of Businessweek declares that â€˜Ebola is comingâ€™ in letters colored like blood, with the subtitle â€˜The US had a chance to stop the virus in its tracks. It missedâ€™. Although the article presents a good analysis of the hurdles in developing antibody therapy for Ebola virus infection, the cover is overstated. Why does Businessweek think that Ebola virus is coming to the US? (there is no mention of this topic in the article). Are we sure that antibody therapy would have stopped the outbreak? (no, as stated in the article).

How the U.S. Screwed Up in the Fight Against EbolaÂ is an analysis of why ZMapp, the cocktail of monoclonal antibodies that block infection with Ebola virus, has not yet been approved for use in humans. ZMapp was given to two American workers who had become infected with the virus while working in Africa. The two workers recovered, but the role of ZMapp in their recovery is unknown – as the authors of the article note. Although ZMapp can prevent lethal infection of nonhuman primates with Ebola virus, it is not known if it would work in humans. Answering that question requires a clinical trial, and the article explores why this phase was not done years ago. Only after the large Ebola virus outbreak in west Africa did the US provide funds to conduct a phase I trial of the drug.

The article discusses how development of ZMapp languished for years, because the US government did not consider the Ebolaviruses to be a pressing problem. In hindsight they were wrong, and now anyone can seem smart by saying we should have pushed development of Ebola virus vaccines and therapeutics.

The real question is whether we will learn from this experience, and be better prepared for the next viral outbreak. Just because infections are rare or geographically localized should not lessen their importance, as these features can change. Knowing the animal source of a viral infection may also lead to developing ways to prevent infections. For example, because people acquire Hendra virus from horses, immunization of these animals should prevent human infections.

What other antiviral vaccines and drugs should we be developing? This question is difficult to answer because we discover new viruses regularly and making therapeutics for all of them is not possible. Testing an antiviral drug or vaccine against rare viruses is difficult because identifying populations that are at risk for infection may be a hit or miss proposition.

Influenza viruses are at the top of the list for vaccine and drug development, because nearly everyone gets infected. Other viruses we should be ready for include SARS and MERS coronaviruses, dengue virus, chikungunya virus, Lassa virus, Nipah and Hendra viruses. Iâ€™m sure you can think of other viruses that belong on this list.

Developing antiviral vaccines and drugs is expensive. For some of the viruses on my list (dengue, chikungunya) there are currently large enough markets that permit involvement of for-profit pharmaceutical companies. Development of therapeutics against viruses that cause rare infections must be supported largely by governments.

The US does not spend enough money on basic life sciences research. We do spend a great deal of money on the military. President Obama recently declared Ebola virus to be a top national security priority. Why not view all infectious diseases in this way, to ensure that they receive the funding for research that they deserve?

While the Businessweek cover is misleading, intended to stimulate sales, the article does make us think about the problems we confront when dealing with rare but lethal diseases. No one should conclude that Ebola virus outbreak in Africa could have been prevented, because antiviral therapies have not yet been tested in humans. But we wonâ€™t know if we never do the research.