An outbreak of enterovirus 68 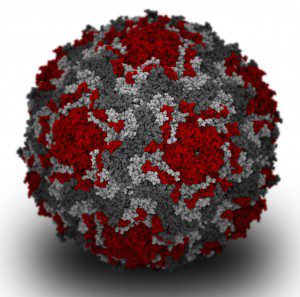 During the winter of 1962 in California, a new virus was isolated from the oropharynx of 4 children who had been hospitalized with respiratory disease that included pneumonia and bronchiolitis. On the basis of its physical, chemical, and biological properties, the virus was classified as an enterovirus in the picornavirus family. Subsequently named enterovirus D68, it has been rarely reported in the United States (there were 79 isolations from 2009-2013). Towards the end of August 2014, an outbreak of severe respiratory disease associated with EV-D68 emerged in Kansas and Illinois.

Although how EV-D68 is transmitted has not been well studied, the virus can be detected in respiratory secretions (saliva, nasal mucus, sputum) and is therefore likely to spread from person to person by coughing, sneezing, or touching contaminated surfaces. The virus has been isolated from some of the children in California with acute flaccid paralysis, and there is at least one report of its association with central nervous system disease. In this case viral nucleic acids were detected in the cerebrospinal fluid. EV-D68 probably does not replicate in the human intestinal tract because the virus is inactivated by low pH.

Readers might wonder why a virus that causes respiratory illness is called an enterovirus. This nomenclature is largely historical: poliovirus, which replicates in the enteric tract, was the prototype member of this genus. Other viruses, including Coxsackieviruses and echoviruses, were added to the genus based on their physical and chemical properties. However soon it became apparent that many of these viruses could also replicate in the respiratory tract. Years later the rhinoviruses, which do not replicate in the enteric tract, were added to the enterovirus genus based on nucleotide sequence comparisons. While it was decided to keep the name ‘enterovirus’ for this group of viruses, it is certainly confusing and I would argue that it should be replaced by a more descriptive name.