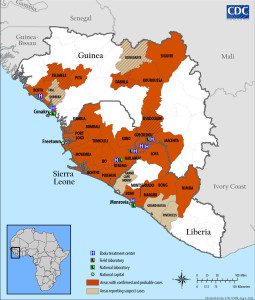 As the epidemic of Zaire ebolavirus in Western Africa continues (1,779 cases and 961 deaths in four countries),Â manyÂ are questioning why there are noÂ means of preventing or stopping infection. In the past two decades thereÂ has been substantial research into developingÂ and testing active and passive vaccines and antiviral drugs, although none have yet been licensed for use in humans.

Using antibodies to treat infection with ebolaviruses withÂ antibodies is probably the best known therapy, because it wasÂ used to treat aÂ twoÂ Americans who wereÂ infected while working in Liberia. They received a mixture of three monoclonal antibodies (called ZMapp) which had been previously shown to block infection of cells with ebolaviruses, and prevent lethal infection of non-human primates when given within 24-48 hours after infection. These are mouse monoclonal antibodies that have been ‘humanized’ so that when given to people they do not induce an antibody response against the antibodies. Humanization involves changing the amino acids of the antibody molecule from mouse to human, except in the part of the antibody that binds antigen. The antibodies are then synthesizedÂ in tobacco plants and purified. Administering anti-viral antibodies to patients,Â also called passive immunization, was done long before vaccines were available. Serum from patients who had recovered from a particular disease would beÂ given to others who had recently beenÂ infected, in order to prevent disease.Â Such therapy was used to save the life of virologist Jordi Casals, who had become infected with Lassa virus while isolating the virus from the blood of a patient, Penny Pinneo. The serum administered to Casals was obtained fromÂ Pinneo, who had recovered from the infection. TheÂ American doctor infected with Zaire ebolavirus while working in Liberia was also given serum from a boy who had recovered from infection.

As ZMapp has not yet been subjected to human clinical trials to determine its safety and efficacy, its use in an infected human is considered unusual. A phase I clinical trial needs to be done to ensure that the preparation of monoclonal antibodies is safe in humans. Determining whether monoclonal antibodyÂ therapy for ebolavirus infection is effectiveÂ is more difficult. Such testing could only be done during an outbreak, during whichÂ it would not be ethical to withhold treatment from the control group. Nevertheless it is clear that such mixtures of monoclonal anti-viral antibodies could potentially save many livesÂ during outbreaks.

A number of experimental vaccines against ebolaviruses are in development. In one approach, the glycoprotein of vesicular stomatitis virus is replaced with the corresponding protein of different ebolaviruses. These vaccines protect non-human primates from lethal infection. A similar approach using an attenuated rabies virus to deliver the ebolavirus glycoprotein also protectedÂ non-human primates from infection, as did immunization with an adenovirus encoding theÂ ebolavirus glycoprotein.Â Â This vaccine candidate has been shown to be safe and immunogenic in phase I clinical trials.Â Another vaccine approachÂ entails productionÂ of the ebolavirus glycoprotein in E. coli. Immunization of mice with the purified protein leads to the production of neutralizing antibodies. Because protein-based vaccines do not replicate, the immune response may need to be boosted by using an adjuvant that stimulates the innate immune system and leads to better antibody production. A double-stranded RNA adjuvant has been shown to augment the immune response against a non-infections, virus-like particle vaccine containingÂ the Ebola virus glycoprotein but not the viral genome.

Antivirals certainly have a place in control of viral disease, and a number of promising candidates to control infection with ebolaviruses have been developed. One is a nucleoside analog which is incorporated into RNA by the viral RNA polymerase and leads to chain termination. It blocks replication of ebolaviruses in culture cells, and protects mice and nonhuman primates from lethal infection. This compound, called BCX4430, is a broad spectrum antiviral that inhibits the replication of not only members of theÂ Filoviridae, but also Arenaviridae, Bunyaviridae, Orthomyxoviridae, Picornaviridae, Paramyxoviridae, Flaviviridae, Coronaviridae. Another inhibitor of viral RNA synthesis is favipiravir, which has the advantage of being in late stage clinical development for the treatment of influenza. This compound inhibits replication of ebolaviruses in cultured cells and reduces disease severity and mortality in a mouse model of disease.

It is likely that the extent of the current outbreak of Ebola virus disease, the largest to date, will provide impetus to moveÂ some of these treatments into human trials. But consider that all the research on active and passive vaccines and antivirals for ebolaviruses required work in BSL-4 laboratories. Those who call for the shuttering of BSl-4 laboratories need to take note and move away from their unrealistic and unreasonable position.