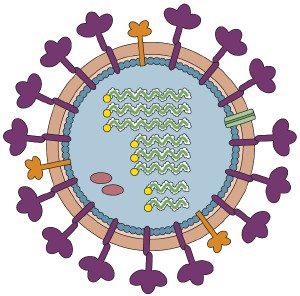 Segmented genomes abound in the RNA virusÂ world. They areÂ found in virus particles fromÂ different families, and can be double stranded (Reoviridae) or single stranded of (+) (Closteroviridae) or (-) (Orthomyxoviridae) polarity.Â Our recent discussionÂ of the advantages of a segmented viral genome, compared with monopartitie genomes,Â generated a good discussion. Another interesting question concernsÂ the evolutionary relationship between the two genome types. DidÂ monopartite viral genomes emerge first, then later fragmented to form segmented genomes?Â Some recent experiments provide insight into this question.

Insight into how a monopartite RNA genome might have fragmented to form a segmented genome comes from studies with the picornavirus foot-and-mouth disease virus (FMDV). The genome of this virus is a single molecule of (+) RNA. Serial passage of the virus in baby hamster kidney cells led to the emergence of genomes with two different large deletions (417 and 999 bases) in the coding region. Each mutant genome is not infectious, but when introduced together into cells, infectious virus is produced. This virus stock consists of a mixture of the two mutant genomes packaged separately into virus particles. Infection takes place because of complementation: eachÂ genome provides the proteins missing in the other.

Further study of the deleted FMDV genomes revealed the presence of point mutations in other regions of the genome. These mutations had accumulated before the deletions appeared, and increased the fitness of the deleted genome compared with the wild type genome.

These results illuminate the first steps in fragmentation of monopartite viral RNA, possiblyÂ a pathway toÂ a segmented genome. It is very interesting that the point mutations that gave the fragmented RNAs a fitness advantage over the standard RNA arose before fragmentation occurred – further evidence that mutations occur in a specific sequence. As the authors write:

While the fragmentation of the FMDV genome may represent a step on the pathÂ to segmentation, its relevance to what occurs in nature is unclear, because the results were obtained in cell culture.

A compelling picture of the genesis of a segmented RNA genome comes from the discovery of a new tick borne virus in China, Jingmen tick virus (JMTV). The genome of this virus comprises four segments of (+) stranded RNA. Two of the RNA segments have no known sequence homologs, while the other two are related to sequences of flaviviruses. The RNA genome of flaviviruses is not segmented: it is a single strand of (+) sense RNA. The proteins encoded by RNA segments 1 and 3 of JMTV are non-structural proteins which are clearly related to the flavivirus NS5 and NS3 proteins.

The genome structure of JMTV suggests that at some point in the past a flavivirus genome fragmented to produce the RNA segments encoding the NS3 and NS5-like proteins. This fragmentation might have initially taken place as shownÂ for FMDV in cell culture, by fixing of deletion mutations that complemented one another. Next, co-infection of this segmented flavivirus with another unidentified virus took place to produce the precursor of JMTV.

Both sets of findings were accidents, made while investigating unrelated problems. The resultsÂ provide new clues about the origins of segmented RNA viruses, and are examples of the value and unpredictable nature of basic science research.