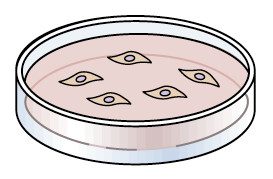 This weekâ€™s question comes from a graduate student studying virology, who writes:

My professor recently said that really, the MOI doesn’t matter in a culture, it is the concentration of viral particles in the media that matters. Ie: if you have 10 million cells or one cell, but you are infecting the plate with 5mL of 100 million viral particles/mL, then the amount of virus interacting with each cell is not different in either scenario (pretending that it isn’t nearly impossible for that single cell to survive in culture alone). I argued with him, saying that the cytotoxicity to the single cell would certainly be increased. He then said that a student hadn’t argued with him about that in his 15 years of teaching and I promptly decided to get some evidence before I continued the discussion.

I’m not actually sure which side is correct. I know that concentration is certainly a large determinant for infectious events/cell. But, it is hard for me to understand why MOI wouldn’t be more important? The more I think about it the more I think that I may be wrong. But if you have two plates with equal numbers of cells, and you add 5 mL of media to one and 50mL of media to the other – assuming that the media is 100 million infectious particles/mL – would the higher MOI plate not result in more infectious events per cell?

My reply: What first jumps outÂ at me is the fact that the professor is using the no one ever argued with me about thatÂ excuse to sayÂ that he/she is right. That is the exact role of a student, to ask questions, and it should never be discouraged. Students can ask the best questions because they are frequently unencumbered by the bias of a field.

where [V] and [H] are the concentrations of virions and host cells, respectively, and k is a rate constant.

For a 6 cm culture dish with an area of 113 square cm, we typically infect with virus in a volume no greater than 0.1 – 0.2 ml. In this way virus attachment to cells will be essentially complete within 1 hr at 37 degrees C. If the same amount of virus were added in 10 ml of medium, the attachment would take much longer; however because the MOI is the same in both cultures, at the end of the adsorption period the number of infected and uninfected cells in both cultures would be the same.

To answer the readerâ€™s last question:

But if you have two plates with equal numbers of cells, and you add 5mL of media to one and 50mL of media to the other – assuming that the media is 100 mill infectious particles/mL – would the higher MOI plate not result in more infectious events per cell?

The answer is yes – assuming you wait long enough for the viruses in the more dilute culture to attach to cells.