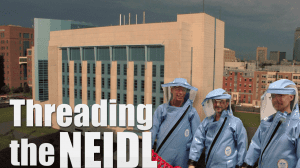 The NEIDL (National Emerging Infectious Diseases Laboratory) at Boston University is a newly constructed biosafety level 4 facility which can be used to study the most dangerous human pathogens. The facility is amazingly safe, as we documented in our film about the facility, Threading the NEIDL. Some members of the Boston City Council think otherwise and have moved to stop the facility from opening.

In January 2014 a draft ordinance was introduced to the Boston City Council that would prohibit BSL-4 research within the city limits. The first public hearing on the proposed ordinance is scheduled for Wednesday, April 16, 2014 at Boston City Hall. Members of the public are invited to attend and testify. I encourage you to read theÂ proposed ordinance which is available online. If you live in the Boston area and have a view on this ordinance, you might consider attending the public hearing. The Boston City Council Calendar of Meetings should be consulted for scheduling changes.

The American Society for Microbiology has provided this statement on the ordinance:

As background information you should be aware that In 2007, the ASM filed an Amicus brief with the Supreme Court of Massachusetts on a case involving a BSL-4 laboratory affirming the importance and safety of BSL-4 research laboratories. That same year, the Society also provided similar testimony before the U.S. House of Representatives.

We believe that scientists should be aware of events that can impact science in their region and have the opportunity to voice their opinions on actions that could affect them, directly or indirectly. We urge any members who are inclined to attend.

The Boston City Council Ordinance seems ill-advised, especially since theÂ NEIDL has gone through a supplemental risk assessment process, and has been blessed by two independent scientific groups (the National Research Council and the NIH Blue Ribbon Panel), and prevailed in Federal Court.

While it might seem frightening to have a BSL-4 facility within a major city, after having toured the NEIDL I can say with confidence that the precautions taken to prevent release of pathogens, both physical and operational, are second to none. As Elke Muhlberger noted during our tour, it is the safest place to work on Earth. I strongly recommend that the Boston City Council members viewÂ Threading the NEIDL to learn why it does not make sense to prevent opening of this facility.