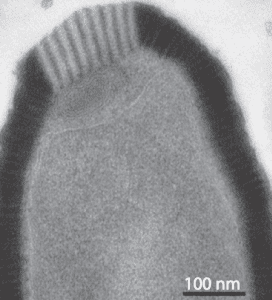 A new virusÂ calledÂ Pithovirus sibericumÂ has been isolatedÂ from 30,000 year old Siberian permafrost. It is the oldest DNA virus of eukaryotes ever isolated, showing that viruses can retain infectivity in nature for very long periods of time.

Pithovirus was isolated by inoculating cultures of the amoebaÂ Acanthamoeba castellaniÂ with samples taken in the year 2000 from 30 meters below the surface of a late Pleistocene sediment in the Kolyma lowland region. This amoeba had been previously used to propagate other giant viruses, such as Mimivirus and Pandoravirus. Light microscopy of the cultures revealed the presence of ovoid particles which were subsequently shown by electron microscopy to resemble those of Pandoravirus. Pithovirus particles are flask-shaped and slightly larger than Pandoravirus – 1.5 microns long, 500 nm in diameter, encased by a 60 nm thick membrane. One end of the virus particle appears to be sealed with what the authors call a cork (photo). This feature, along with the shape of the virus particle, Â inspired the authors to name the new isolate Pithovirus, from the Greek wordÂ pithosÂ which refers to the amphora given to Pandora. The name therefore refers both to the morphology of the virus particle and its similarity to Pandoravirus.

Although the Pithovirus particle is larger than Pandoravirus, the viral genome – which is a double-stranded molecule of DNA – is smaller, a â€˜mere 610,033 base pairsâ€™, to use the authorsâ€™ words (the Pandoravirus genome is 2.8 million base pairs in length). There are other viruses with genomes of this size packed into much smaller particles – so why is the Pithovirus particle so large? Might it have recently lost a good deal of its genome and the particle size has not yet caught up? One theory of the origin of viruses is that they originated from cells and then lost genes on their way to becoming parasitic.

We now know of viruses from two different families that have similar morphology: an amphora-like shape, an apex, and a thick electron-dense tegument covered by a lipid membrane enclosing an internal compartment. This finding should not be surprising: similar viral architectures are known to span families. The icosahedral architecture for building a particle, for example, can be found in highly diverse viral families. The question is how many viruses are built with the pithovirus/pandoravirus structure. My guess would be many, and they could contain either DNA genomes. We just need to look for them, a process, as the authors say that â€˜will remain a challenging and serendipitous processâ€™.

Despite the physical similarity with Pandoravirus, the Pithovirus genome sequence reveals that it is barely related to that virus, but more closely resembles members of the Marseillviridae, Megaviridae, and Iridoviridae. These families all contain large icosahedral viruses with DNA genomes. Â Only 32% of the 467 predicted Pithovirus proteins have homologs in protein databases (this number was 61% for Mimivirus and 16% for Pandoravirus). In contrast to other giant DNA viruses, the genome of Pithovirus does not encode any component of the protein synthesis machinery. However the viral genome does encode the complete machinery needed to produce mRNAs. These proteins are present in the purified Pithovirus particle. Pithovirus therefore undergoes its entire replication cycle in the cytoplasm, much like other large DNA viruses such as poxviruses.

Pithovirus is an amazing virus that hints about the yet undiscovered viral diversity that awaits discovery. Its preservation in a permafrost layer suggests that these regions might harbor a vast array of infectious organisms that could be released as these regions thaw or are subjected to exploration for mineral and oil recovery. A detailed analysis of the microbes present in these regions is clearly needed, both by the culture technique used in this paper and by metagenomic analysis, to assess whether any constitute a threat to animals.